On Saturday England play their first match of Euro 2016 when they face Russia. Whatever the outcome, there is unlikely to be quite the same feeling of despondency as when England met the Soviet Union in their last match at Euro ’88. Already eliminated from the tournament and with the match not even being shown live on British television (the Republic of Ireland’s decisive game against the Netherlands was screened by the BBC instead), Bobby Robson’s side gave a tame performance to lose 3-1 and exit the finals without a point to their name. For a number of individuals, it wasn’t a time to fondly recall… 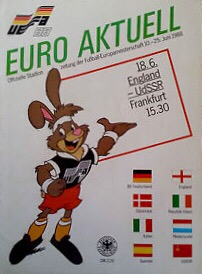 The one thing to take the headlines away from England’s failings on the field at Euro ’88 was the conduct of their hooligans off it, with violence on the streets of Stuttgart and Düsseldorf having marred their matches against the Republic of Ireland and the Netherlands respectively. There had been plenty of unfortunate instances of hooliganism involving a section of England’s followers before, but now the problem was threatening the future of the national side.

On the eve of the match against USSR, Football Association chairman Bert Millichip was asked during an interview by ITV if this was the worst crisis he had known for English football. He responded that it was and speculation was now growing that England would be excluded from the 1990 World Cup qualifying programme, amid reports of the Government no longer wanting them to travel abroad. English club sides remained banned from Europe, the trouble in West Germany putting paid to any hopes of a return for 1988-89. As The Times commented at the time: “Britain is being viewed worldwide as little more than a zoo of dangerous animals which are released upon innocent foreign cities with a government unwilling to tackle the crisis head on.”

England’s exclusion from the World Cup didn’t happen in the end. Had it been imposed there would have been no momentous run to the semi-finals at Italia ’90, no World in Motion, no Gazza’s tears and no redemption for manager Bobby Robson either after he was hounded during the summer of 1988…

A 2-0 home defeat against the USSR in a friendly in June 1984 had represented the previous low point for Bobby Robson during his England reign. England had a few months earlier failed to qualify for Euro ’84 and this latest loss ended with him being barracked by a vocal section of the Wembley crowd. Over the next four years he enjoyed a turnaround in fortune, qualifying unbeaten for both Mexico ’86 and Euro ’88. But now England were back in crisis. Robson could point to a combination of bad luck and key chances being missed during their opening two matches in West Germany, but against the USSR he had no such excuses to offer. He would lament it as “without doubt the worst performance” during his time in charge and the vultures were circling, as he remained caught in the tabloid war between The Sun and the Daily Mirror. Robson did offer to step down, but Millichip gave him his backing to carry on. 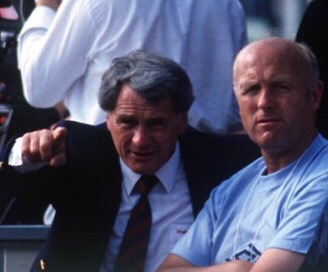 It was clear the manager was feeling the strain. The late Joe Melling, of The Mail on Sunday, would later recall writing an article calling for Robson to move on as “it’s a heart attack waiting to happen”. Thankfully no such thing happened to Robson, but just days after the Euros his assistant manager Don Howe was in intensive care after suffering a suspected heart attack. The connection between his ill health and the stress of the England role wasn’t confirmed, but plenty were putting two and two together. And Howe wasn’t the only member of England’s party spending time in hospital shortly after coming home from West Germany…

Two years after finishing top scorer in the 1986 World Cup, Gary Lineker endured a barren time in West Germany and felt strangely lethargic. He was puzzled as to what was making him feel this way, but he felt totally bereft of energy going into the USSR match. “In training the day before I could barely lift my legs,” he recalled last year in the magazine FourFourTwo. “We were already out of the tournament and I know Don Howe and Bobby Robson thought I was trying to get out of the game – they all but said as much. I played against the Soviet Union and came off after about an hour. I’d never played in a game where I was so certain I shouldn’t be on the pitch. I was in a dreadful state.”

Lineker took exception to comments from Bobby Robson in which he criticised players for “not wanting to play”. England flew home and soon Lineker was in hospital, with it coming to light he was suffering from hepatitis which helped explain his lack of energy. Lineker recalled Robson coming to visit him in hospital and apologising, with the forward to retain a regular place in the England side the following season despite struggling for goals as he worked his way back to full fitness. But it became evident that Robson had not just been referring to Lineker with the “not wanting to play” comment, as another member of the side was to pay for complaining of an injury ahead of the Soviet Union match…

England desperately missed the injured Terry Butcher during Euro ’88, with the pairing of Tony Adams and Mark Wright – both playing in their first major tournament – unable to prevent four goals being conceded in the opening two matches. In the match against the USSR, Adams – the more criticised of the two – scored but Wright wasn’t involved after complaining of an injury. It proved a costly move, Bobby Robson not selecting him again until April 1990. Wright went on to shine during Italia ’90, but his absence from the USSR match was soon brought back into the spotlight later that year when Robson published his autobiography Against the Odds.

Writing about Wright, Robson said: “He is a complicated character and had he been more straightforward I, and England, would have had two extra years out of him. I feel that sometimes he uses small injuries as an excuse for missing a match or a pre-arranged excuse if things do not go so well. Against Holland two years ago in the European Championship he vied with Bryan Robson as our best player but when it came to the ‘dead’ match against the Soviet Union he suddenly turned up with an injury saying he didn’t think he was fit enough to play but would do so if I wanted him. He did the same thing in Italy when a calf injury appeared from nowhere before the play-off game in Bari. This time I told him to play and maybe if I had done that against the Soviets he would have a lot more caps now.”

Wright was reported to be unhappy about Robson’s comments. But Wright had at least come back into the England side. For others there would be no return…

Glenn Hoddle and Kenny Sansom both played their last England match against the Soviet Union in 1988.

Nine years earlier, Glenn Hoddle has burst onto the England scene amid great excitement when he scored on his debut against Bulgaria. Now against USSR he was playing what would be his final England match, being culpable for the opening goal conceded after three minutes as he carelessly lost possession and Sergei Aleinikov scored past Chris Woods. As Rob Smyth wrote in his excellent re-assessment of England’s Euro ’88 campaign, it showed “while their bodies were on the pitch at Frankfurt, their minds were already at home”.

The mistake may not have been what made Bobby Robson’s mind up over Hoddle, but it was certainly symbolic. When England returned to action after the European Championship failings there was no place for Hoddle. Despite some calls for him to be included in the Italia ’90 squad, there would not be a recall for him. Nor would Kenny Sansom ever be capped again, paying both for the emergence of Stuart Pearce and for losing his place in the Arsenal side. Dave Watson, deputising for Mark Wright against the USSR, would never be picked again either. For others too the match would not help their future chances. Woods had enjoyed a rare run-out in place of Peter Shilton, with Robson admitting later he was toying with finding a new number one goalkeeper to replace the veteran regular. But for Woods it was an opportunity spurned, having conceded three times. Shilton would remain first choice, despite having been on the end of a punch from the captain out in West Germany…

Dave Watson was among the players never capped again after appearing against the Soviet Union.

For once England captain Bryan Robson was injury-free as they played in a major tournament, but despite his goal against the Netherlands he was unable to prevent the side bowing out without a point. In the hotel bar one night he started taking criticism from Peter Shilton, who he normally got on well with. Robson wrote in his autobiography: “It shocked me because he’d never turned on me before. He went on and on, taunting me about the ‘Captain Marvel’ stuff and saying he was the number one… He went on and on. I kept my temper for about half, three-quarters of an hour. Then he said I was a ‘bottler’ and that was when I snapped. He was sitting at the bar so I told him, ‘Get up and I’ll show you who’s a bottler’. He wouldn’t get up, but I was so angry I punched him. He just sat there and went quiet. I was fuming, but as soon as I went for him I knew I shouldn’t have.”

Th pair quickly made their peace and stayed international team-mates for another two years, but it had been an unsavoury incident involving two of the team’s most senior players that summed up England’s miserable summer. The squad headed home after three defeats, with the match against the USSR particularly deflating. When they next took to the field in September against Denmark, Bobby Robson made changes including giving debuts to Paul Gascoigne and Des Walker who both went on to shine during Italia ’90. That tournament was Bobby Robson’s swansong and it proved a much better way to go out than if it had been after the shambolic performance against the USSR in 1988.