England’s qualifying campaign is under way for the 2018 World Cup. Forty years ago they were seeking to reach the 1978 finals in Argentina, but they would once more miss out on making it to a major tournament…

England had begun the 1970s with serious aspirations to retain the World Cup in Mexico. But a quarter-final loss to West Germany started a decade to forget, including failing to progress from the qualifying group for the 1974 World Cup and 1976 European Championship. Now they would try to make it to the 1978 World Cup, but few Englishmen were making plans to spend that summer in Argentina. England’s recent decline meant they were not a seeded nation in qualifying and they would have the misfortune to be paired with Italy. With only one nation going through, a previous World Cup winner would definitely be missing out.

The Italians would be favourites, but they too had endured a lean recent period. They had gone out at the group stage of the 1974 World Cup and then failed to make it to the 1976 Euros – albeit after being placed in the mother of all hard qualifying groups including the Netherlands and Poland (second and third respectively at the 1974 World Cup). Italy had been surprisingly held to a draw by Finland, who would be in England and Italy’s qualifying group for the 1978 World Cup along with European football’s whipping boy of Luxembourg. It looked a clear two-horse race between England and Italy.

At the end of the 1975-76 season England gave themselves a psychological boost for the qualifying campaign when they beat Italy 3-2 in the US Bicentennial Cup. It put them in good heart for the opening qualifier in June 1976 away to Finland. It was an unusually early start to an England qualifying series and they laid down a marker by winning 4-1, with Kevin Keegan scoring twice. It was just the sort of convincing result manager Don Revie needed to get the nation believing that England would get to Argentina.

As the scorching summer of 1976 finally started to draw to a close, England drew 1-1 with the Republic of Ireland in a September friendly before Finland visited Wembley for the next qualifier in October. If the away win had generated belief, then this match would see pessimism resurface as fans voiced their displeasure over England’s display.

England had started brightly and quickly forged ahead through Dennis Tueart, but they failed to make the most of their early dominance. Kalle Nieminen drew the Finns level early in the second half, and though Joe Royle quickly regained England the lead there would be no further scoring. The 2-1 victory was seen as a missed opportunity in terms of the goal difference and confidence, with Revie unimpressed and sympathising with supporters. “I want to apologise to them on behalf of myself and the team… We lost our rhythm, our passing, our thinking, our positional sense – in fact, everything.” 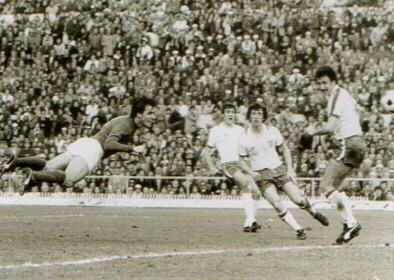 The key date in the group was November 17, 1976, as England made the daunting trip to Rome for a huge qualifier. Revie contentiously made a series of changes from the previous game, including recalling Emlyn Hughes after 18 months in the wilderness. England seemed to lack the belief they could go and win. The Italians were a good side with a heavy Juventus influence, seeming far more settled than England. It appeared a draw at best would be England’s reward. Trevor Brooking recalled in his autobiography that he was the only attacking midfielder selected. “It was a team designed to contain the Italians,” he wrote, adding that Revie had watched the Italians seven times in preparation.

They held out for 36 minutes before Giancarlo Antognoni’s free-kick was deflected in off Keegan. Revie’s side stayed in with a glimmer of hope until 13 minutes from time, Roberto Bettega’s diving header sealing a deserved 2-0 win for the hosts. “They murdered us 2-0,” recalled Hughes 20 years later. It left the Italians as clear favourites to qualify, England knowing they would have to win the return 12 months later to stand any chance. But Bettega’s goal would symbolise England’s failure. “We knew then that we had almost certainly blown our chances of qualifying for Argentina,” admitted Brooking. 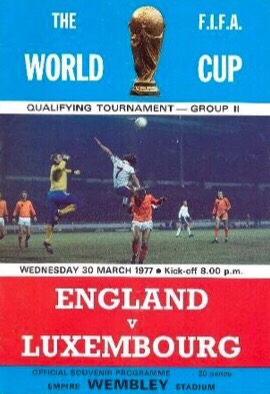 England’s 5-0 win over Luxembourg failed to silence the critics.

England had looked second best in Rome and they would again be well-beaten when an excellent Dutch side visited Wembley for a friendly in February 1977 and won 2-0. The inquests were continuing into what had gone wrong with English football, but they stayed in with a shout of making the finals with a 5-0 win over Luxembourg at Wembley. Mick Channon scored twice on a night when John Gidman won his only England cap and Paul Mariner came off the bench for his international debut. Even after a big win, the criticism poured in with the result put into context by the opposition’s limitations. Norman Fox wrote in The Times: “It was another unsatisfactory performance, too stunted by unimaginative, mundane football that persistently threatens to stop them qualifying for the final tournament in Argentina next year.”

The end for Revie

Liverpool’s European Cup victory at the end of the season began a period of domination for English clubs in the competition, but the national team remained away from international football’s top table. The gloom for Revie continued during the Home International Championship, England losing at home to both Wales and Scotland. The side now headed off to South America for their end-of-season tour. If it was intended as preparation for the following year’s World Cup finals in Argentina, then it was increasingly looking a futile exercise. While there, Italy won 3-0 away to Finland – leaving them as firm favourites to qualify. England returned home unbeaten after draws with Brazil, Argentina and Uruguay – the middle match having been particularly brutal with Trevor Cherry sent-off and losing two of his front teeth after being punched.

The results on tour seemingly represented an improvement for Revie (pictured below), but the manager was already looking towards his next challenge. The following month The Daily Mail ran an exclusive story that he was quitting the England job, with it coming to light he was taking up a role in the United Arab Emirates that offered high earnings if not necessarily top class football.

The Football Association hierarchy were infuriated to learn of Revie’s defection via the media before they received his resignation latter. It was a messy divorce that sadly left the former Leeds United boss ostracised from the English game. He would maintain though that he jumped before he was pushed, fearing the sack was inevitable if England did not reach the World Cup. “Nearly everyone wanted me out. So I’m giving them what they want,” was Revie’s parting shot.

With Revie gone, the FA was now left to find a successor. Amid the public clamour for Brian Clough, a less outspoken figure was selected as 55-year-old Ron Greenwood became caretaker manager. Greenwood had moved upstairs at West Ham United but he had admirers at the FA who saw ‘Reverend Ron’ as the right man to manage England in the circumstances – appreciating his coaching methods and diplomacy. He had his fans among the players too, Brooking – who knew him well from West Ham – describing him as “the most imaginative and thoughtful coach I worked with in my career”.

Greenwood made a bold statement in his first friendly against Switzerland when he named six Liverpool players in the side (plus Kevin Keegan who had just left the European champions for a new challenge with SV Hamburg). The decision to select Ian Callaghan was most intriguing, 11 years having elapsed since his last cap against France during the 1966 World Cup. Unfortunately the match saw England continue their poor Wembley run, being held to a 0-0 draw.

If England’s chances of qualifying looked bleak going into October, then they would soon slip towards non-existent. Away to Luxembourg, England needed a big victory to stay in with a realistic chance and they could only win 2-0 (with a section of their followers making headlines for the wrong reasons). “Our finishing and composure was not good,” admitted Greenwood. Italy then thrashed Finland 6-1 and England now needed a miracle to qualify. The Italians had the same points as England but a goal difference four better and a game in hand. England would have to beat Italy convincingly and then somehow hope Luxembourg could keep the score down away to the Italians. It was a forlorn hope.

To make things genuinely difficult for the Italians, England would probably have to beat them by at least five goals – an unlikely scenario that would leave the Azzurri needing to beat Luxembourg by seven. But even then Italy would still be capable of getting the required score, so limited were Luxembourg. Whatever England did, there would be a feeling it wasn’t going to be enough. Most had accepted it was already over and just wanted to see a win on the night to restore pride. Greenwood sought to get maximum use out of wingers, with debutants Peter Barnes and Steve Coppell both coming into the side and giving cause for optimism. Forward Bob Latchford was also handed his first cap. 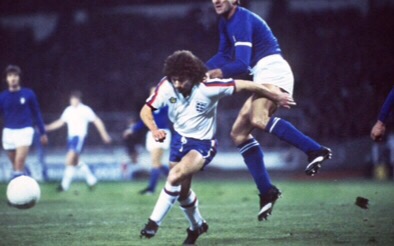 England’s 2-0 win over Italy proved too little, too late.

They duly got it. Kevin Keegan and Trevor Brooking scored as England atoned for their 2-0 defeat a year earlier by beating Italy by the same scoreline. Although the result meant Italy needed only a win of any scoreline against Luxembourg to qualify, there was a sense of satisfaction around England about the performance. Fox wrote that England supporters saw “something for the future beyond present disappointments”, while conceding the side had “less than a slim chance” of making it to Argentina.

But the evening had helped Greenwood’s chances of becoming manager full-time. On December 3 only the most optimistic of Englishmen clung to the tiniest hope that whipping boys Luxembourg could somehow hold out against the Italians to take the Three Lions through to Argentina. Within 11 minutes they were 2-0 down, Italy eventually easing home to a 3-0 win as they took their regular spot in the finals.

For England it was disappointing, but less devastating than their other failures to make the World Cups of 1974 and 1994. There had been no game as painfully dramatic as the infamous draw with Poland in October 1973, nor one as controversial as the costly defeat against the Netherlands in October 1993. They had matched the Italians head-to-head, won five games out of six and fallen just three goals short of making it. But the failure to win the group surprised few, many younger fans having yet to see them qualify for a major finals.

England had paid for losing away to Italy and a lack of goals in the victories at home to Finland and away to Luxembourg. In some respects they were unlucky, and they were certainly no less deserving of qualifying than when they scraped through four years later (after the competition had expanded to 24 teams). But they had ultimately fallen short and looked second best when it really mattered in Rome, always unsuccessfully playing catch-up after that.

The one consolation for England was they once more only missed out to a side who made an impact at the finals. Italy would finish fourth in Argentina, beating the hosts and eventual winners along the way. By then Greenwood was firmly installed as permanent England manager, as he sought to finally lead the country to a major tournament.