With interim boss Gareth Southgate about to manage England for the first time against Malta, we look back at the six previous occasions the side was led by temporary managers…

Of the men to lead England on a caretaker basis without getting the job permanently, Joe Mercer would easily have the busiest reign – his seven-game run also proving six matches longer than Sam Allardyce’s stint as ‘permanent’ manager! Coventry City general manager Mercer took the England job at a difficult time, the team having failed to qualify for the 1974 World Cup and with Sir Alf Ramsey having been sacked. ‘Genial Joe’ was left to work with the players selected for the end of season matches by Ramsey, but helped stamp his own identity on the team as he sought for England to regain the smile that had been lost with their recent decline.

Taking the job shortly before his 60th birthday, Mercer won his first two games in May 1974 against Wales and Northern Ireland before losing to Scotland in a decisive Home International Championship match. That was the first of five successive matches Mercer would face against sides who, unlike England, would be going to the World Cup. There was a lot of national pride at stake, the nation wanting to believe the qualification failure was a mere fluke. A ‘friendly’ at home to Argentina took place with some scars having not totally healed from their infamous World Cup quarter-final in 1966. The Argentine referee awarded the visitors a late penalty that was converted as the fiery contest ended 2-2.

England then headed to Europe for a three-match tour, which yielded a 1-1 draw with East Germany, a 1-0 win over Bulgaria and a 2-2 draw with Yugoslavia. Mercer proved popular with the players and achieved good results, but the Football Association was setting its sight on someone else for the job full-time. When England next took to the field in October, Don Revie was in charge.

Following Revie’s sudden departure to the United Arab Emirates in the summer of 1977, the FA offered Ron Greenwood the chance to step into the breach for three games. Greenwood had moved upstairs at West Ham United but was happy to get his tracksuit back on and lead the national team. He quickly showed he was willing to do his own thing when he selected six Liverpool players for a goalless friendly against Switzerland, before the next game produced a 2-0 win away to Luxembourg in a World Cup qualifier. England’s hopes of qualifying were very slim but a 2-0 win over Italy in their final game – while proving insufficient – gave cause for optimism for the future. Despite a public clamour for Brian Clough to get the job full-time, Greenwood was given the nod – remaining in the role until 1982.

Glenn Hoddle’s dismissal as England boss in February 1999 left England needing to find a manager for the friendly against world champions France at Wembley a week later. Howard Wilkinson, who was the FA’s technical director and had led Leeds United to the First Division title in 1992, was the man placed in temporary charge. He suffered a 2-0 defeat to the French and within days Kevin Keegan had replaced him. 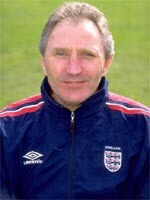 In October 2000, Keegan suddenly quit after England lost 1-0 to Germany in the last match at the old Wembley. The timing was far from ideal, given the side faced a World Cup qualifier in Finland just four days later. Wilkinson was again asked to lead the side, with England labouring to a 0-0 draw – although they would believe Ray Parlour’s effort crossed the line. It was the last time Wilkinson managed the national side, although he did have a spell in charge of the under-21s. 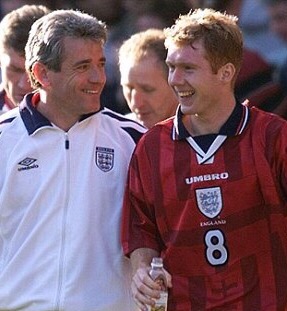 Kevin Keegan makes a winning start with England thanks to Paul Scholes.

During the caretaker reigns of both Mercer and Greenwood, Kevin Keegan had been a player. In February 1999 he accepted the England manager’s position for a four-game period, combining the caretaker role with managing Fulham full-time. Keegan got a fine response from the players in his first game in March, Paul Scholes scoring a hat-trick against Poland as England won 3-1 in a vital Euro 2000 qualifier. Keegan got on with leading Fulham to promotion from the Second Division, but by the time he next managed England for a 1-1 friendly draw away to Hungary in late April there was increasing speculation he could stay beyond the intended four games with his country. Sure enough, within days it was announced he was leaving Fulham. He remained in charge of England until October 2000, struggling to recapture the euphoria of the Poland game. 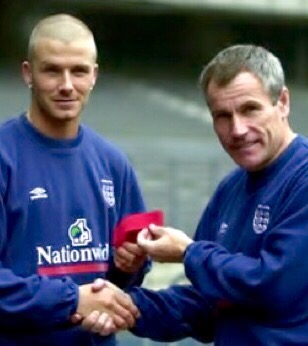 The year 2000 was a good one for former England player Peter Taylor. He led Gillingham to victory in the Second Division play-off final, then moved to Leicester City and briefly took them to the top of the Premier League early in the 2000-01 season. And in November he was given the chance to manage England for their friendly away to Italy, assisted by Steve McClaren. By then Sven-Goran Eriksson had been confirmed as new permanent manager but he was still under contract with Lazio, so Taylor was in charge for this match. The former England under-21s manager fielded a largely youthful side, with his most significant move being to hand David Beckham the captaincy for the first time. England lost 1-0 and, with Eriksson leaving Lazio earlier than expected in January 2001, it was to be the only time Taylor managed his country at full level.

Gareth Southgate joins several of his interim predecessors in having also led the England under-21s. One of them, Southgate’s former England team-mate Stuart Pearce, was given his one chance to manage the England senior team against the Netherlands in February 2012 for a Wembley friendly following Fabio Capello’s departure. Pearce had been part of the senior coaching set-up under Capello and seemed a suitable figure to step into the breach. Unfortunately England suffered a 3-2 defeat and Roy Hodgson would be in permanent charge by the time of the next match three months later. Pearce was to lead Team GB during London 2012’s men’s football competition, but the following year he lost his role with England under-21s following a poor European Championship.

England managers and coaches, Six of the Best & Worst