Ahead of the World Cup, we take a 10-step look back at England’s warm-up matches for the tournament down the years – from picking opponents based on their geographical location to getting off to a good start with the locals at their World Cup base by playing a match against them…

Hardly an issue when World Cups have been played in Europe, but when held in warmer climates around the world England have headed out early and gained vital experience of the elements. This was particularly true for the World Cups in Mexico in 1970 and 1986, as England had to adapt to both the intense heat and altitude. They recorded wins away to Colombia and Ecuador in 1970 and beat Mexico and Canada 16 years later – the latter match sparking fears Gary Lineker could miss the World Cup after he went off clutching his wrist.

More recently, in 2014 England called at Miami en route to Brazil for drawn games against Ecuador and Honduras. The latter match certainly provided challenging conditions after play was halted for 40 minutes during the first half amid a thunderstorm!

In June 2006, England’s last game before the finals brought a 6-0 win over Jamaica at Old Trafford. As well as offering a taste of Caribbean opposition ahead of meeting Trinidad & Tobago – more on those type of friendly choices later – it also meant the side went into the tournament feeling buoyant after a big win. Not that it paved the way for English glory. They had scored six goals here but would only manage that many in total from their five games in the tournament. 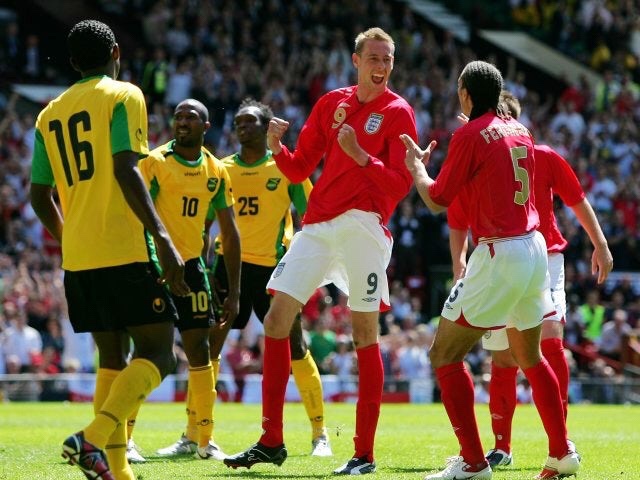 Jimmy Greaves could probably emphasise, having scored a hat-trick against Peru just before the 1962 World Cup and netted four times away to Norway prior to the 1966 finals but ultimately scoring just one and no goals in the two respective tournaments. But there have been instances where the momentum gained in friendlies appears to have been carried through. In June 1982, England’s last international before the World Cup yielded a 4-1 away win over Finland with Bryan Robson and Paul Mariner each scoring twice. In their first game at the tournament, Robson (2) and Mariner were again on target in a memorable 3-1 victory over France.

In days gone by, it seemed fated that if England arranged a friendly for the build-up to a World Cup they would then be drawn in the same group as their opponents to mess the preparations up. It happened in both 1982 and 1990 when England’s planned matches against France and the Republic of Ireland respectively were called off following the draw, as managers sought to avoid showing their hand to their opponents (for good measure, each time England qualified for the European Championship from 1980 to 1992 they had friendlies planned against a side who would then be drawn in the same group – but these matches still went ahead).

But a more curious example came 60 years ago, when the Soviet Union hosted England just three weeks before they would meet in the World Cup. In an era where non-competitive internationals tended to be taken more seriously than today, England fielded exactly the same side as they would for the World Cup clash and a crowd of more than 100,000 saw the sides draw 1-1 in the first of four meetings in 1958.

Since 1986, England have been drawn in the same World Cup group as an African nation six times. And on each occasion a friendly has been arranged with another side from Africa in the months leading up to the finals. It’s open to debate if a friendly meeting with a side from the same region offers a true indicator of what a World Cup match against their neighbours will be like, but such games seemingly always get picked. England have lined up a game against Costa Rica ahead of meeting neighbouring Panama in the World Cup this year.

Of course, the process also works in reverse and the likes of Wales have often faced England’s opponents ahead of World Cups. There are also occasions where a meeting appears mutually beneficial. At the 2002 World Cup England were to play Nigeria and Cameroon would face the Republic of Ireland. Therefore, following the usual logic of wanting to face sides from the same region, it was little surprise England and Cameroon met in Kobe a few days before the tournament began – playing out a 2-2 draw.

Sadly no more, but for many years the Home Internationals would feature during England’s World Cup preparations. This was particularly true in 1970, when they played their three UK opponents in the space of a week shortly before heading overseas to begin their acclimatisation for the tournament. The week saw Bobby Charlton became only the second man to reach 100 England caps, marking the occasion with a goal while wearing the captain’s armband against Northern Ireland.

What the matches may have lacked in climate and foreign opposition in terms of World Cup preparation, they compensated for with their competitiveness – especially against Scotland. Although the Home Internationals, and their successor the Rous Cup, are long gone, England have since played in a mini-tournament before a World Cup. In 1998 they ventured to Morocco for the King Hassan II Cup and it would act as a good indicator of what lay ahead that summer – Michael Owen showing his potential by scoring his first England goal to defeat Morocco, before the side lost on penalties against Belgium.

A growing trend in recent times has been for some friendly internationals to be played in neutral countries. In 2010 England headed to Austria for altitude training ahead of the World Cup in South Africa and while there they faced Japan. Unusually their 2-1 win came courtesy of two own goals, although their unconvincing display perhaps offered an ominous warning sign that they may struggle to make an impact in the tournament.

Although it happened some seven months before a World Cup, we can’t ignore here the most memorable England friendly on neutral soil. At the start of their World Cup preparations in November 2005 England played out an enthralling clash against Argentina in Geneva, with two late goals from Michael Owen earning a 3-2 win that sparked joyous scenes and generated great hype about the side’s prospects in the following year’s tournament.

The games leading up to World Cups can go a long way to deciding who makes it on the plane for the tournament, as some players make the squad after impressing in the friendlies and others fall out of the reckoning.

Paul Gascoigne would experience both sides of the coin. England’s friendly against Czechoslovakia in April 1990 was billed as make-or-break for him, with manager Bobby Robson saying: “It is a match where some players should be looking to book their ticket to Italy. It is as simple as that.” Gascoigne had not totally convinced Robson of his merits previously but he did so in style here, completing the scoring in England’s 4-2 win and producing a superb assist for Steve Bull to score – the Wolves forward also effectively clinching his place in the squad with his display.

But eight years later boss Glenn Hoddle was beginning to harbour reservations about Gascoigne’s fitness as the finals approached. In England’s last warm-up international against Belgium in Morocco he saw Gazza struggle to impose himself and Hoddle knew the game was up. He would axe Gascoigne from the finals squad – a story that made front page news.

At the height of English hooliganism the last thing the national team needed was to get off on the wrong foot with the people of their group stage host city or town. So one way to help make a positive early impression was to arrange a warm-up match against the locals. There wouldn’t be any caps awarded but the games would still be important in terms of fitness and players proving their worth.

In March 1982 there was a gap in the schedule following the aforementioned cancellation of a planned friendly against France and so England instead took on Athletic Bilbao, where Ron Greenwood’s side would be based for the opening round. After the 1-1 draw, Steve Curry wrote in the Daily Express: “England may not win the World Cup but last night they showed how to win friends and influence people.”

Prior to Italia ’90 there were easy wins for England over Cagliari (6-0) and a Sardinian XI (10-2), although the latter would be best remembered for Steve McMahon deliberately scoring an own goal at the start to send out a message to the English fans that any hooliganism would effectively count as an OG in terms of the impact it would have.

More lighthearted was a game England arranged against a team of 22 schoolchildren prior to the 1986 World Cup in Mexico, with the 5-5 draw seeing referee Bobby Robson jokingly send off three England players including Ray Wilkins – it wouldn’t seem quite so amusing when Wilkins was red carded for real against Morocco just days later.

There has often been a tendency for England’s chances to be talked up by sections of the media going into the World Cup, but twice in the 1950s a warm-up result gave serious cause for concern. When England visited Hungary ahead of the 1954 finals, it was merely a matter of months since an infamous 6-3 mauling by the Hungarians at Wembley. The Hungarians would prove it had been no fluke by now thrashing England 7-1, confirming Walter Winterbottom’s men were a long any off being best in the world. England would bow out with defeat by Uruguay in the quarter-finals.

Four years later England were still coming to terms with the Munich Air Disaster when they headed to Belgrade – the city where the Busby Babes had played their last ever game – to take on Yugoslavia. England’s 5-0 defeat clearly showed how much they were missing the late Roger Byrne, Duncan Edwards and Tommy Taylor and they would duly exit the World Cup in Sweden without winning a game.

England’s World Cup warm-up games may seem like mere looseners ahead of the real thing, but occasionally they can become mired in controversy. Their last full international before Italia ’90 brought an unimpressive 1-1 draw away to Tunisia that contained few hints that England could come close to going all the way in Italy. But the main talking point afterwards concerned Terry Butcher appearing to have headbutted an opponent, sparking calls for him to be sent home. Bobby Robson resisted and Butcher ended up captaining the side in the knockout rounds of the tournament.

Red cards in England friendlies are rare but their last two games before the 2014 World Cup brought a total of three dismissals against Ecuador and Honduras in Miami. Raheem Sterling was sent-off along with Ecuador’s Antonio Valencia as tempers boiled over, before Honduras had Brayan Beckeles sent off in a rather unfriendly friendly that saw six other players from the two sides cautioned.

But the most controversial moment in England’s World Cup preparations had nothing to do with matters on the field. England’s decision to visit Colombia ahead of the 1970 tournament may have helped in terms of acclimatising for the finals in Mexico, but it would otherwise be regretted after captain Bobby Moore was infamously arrested as he stood accused of stealing a bracelet. The English nation was incredulous over the mere suggestion Moore could commit such an offence and he would duly soon be released, going on to enhance his reputation in the tournament.