On Friday night England face Croatia, just three months on from the sides meeting in the World Cup semi-final. Today we look back at six previous instances when England quickly came up against sides they had played at major tournaments…

Prior to the start of 1958 there had never been a meeting between England and the Soviet Union. But all that changed with the sides coming up against each other four times in a matter of months. They drew in a friendly in Moscow, before clashing twice in the World Cup in Sweden. England earned a 2-2 draw before losing 1-0 in a play-off to determine who would reach the quarter-finals. 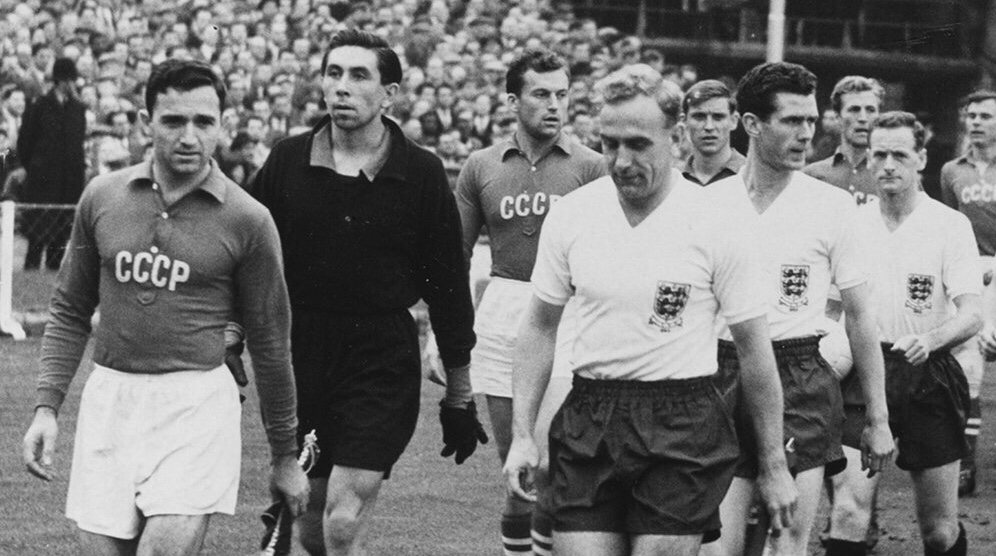 But that wasn’t the end of the story. In October a friendly was arranged between the sides at Wembley, with 100,000 fans showing up to see it. And England would gain revenge by winning 5-0, with Johnny Haynes scoring a hat-trick. A Bobby Charlton penalty and a last minute Nat Lofthouse goal completed the rout as English pride was restored in an era when friendlies tended to carry more prestige than they do now. The match was also significant for being the great Tom Finney’s last England cap.

England and West Germany’s meeting in the second round group phase at the 1982 World Cup hadn’t exactly been a classic, a fear of losing strangling the life out of the contest and leading to an inevitable 0-0 draw. The Germans would be the side to advance and eventually reach the final, with England again wondering what might have been.

In October the sides were reunited for a Wembley friendly, although England’s line-up was very different with Gary Mabbutt, Ricky Hill, Cyrille Regis, David Armstrong, Alan Devonshire and substitute Luther Blissett all featuring after not being in the World Cup squad.

The match would also be significant for being Bobby Robson’s first home game as manager and he saw his transitional side beaten after Karl-Heinz Rummenigge scored twice in the last 20 minutes – with substitute Pierre Littbarski making a big impression after coming on as substitute, 24 hours after starring when the nations met at under-21s level. A late goal by Tony Woodcock proved only a late consolation as West Germany became the first foreign team to win at Wembley twice.

England and the Republic of Ireland both enjoyed prolonged runs at Italia ’90, but the group stage meeting between them had stunk the place out and earned plenty of criticism for the lack of quality. Five months later they would meet again, with England facing a difficult trip to Dublin in a European Championship qualifier. 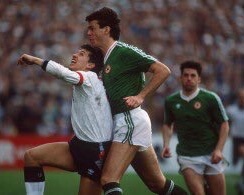 Neither side could afford to lose and there was little chance of skill shining through on a windy afternoon in Dublin. Graham Taylor controversially preferred Gordon Cowans to Paul Gascoigne in midfield. David Platt put England ahead, before Tony Cascarino drew the Irish level.

For the second time in a matter of months, England had gone ahead against the Irish and had to settle for a 1-1 draw and there was a sense of inevitability about it. “A fair result in a highly predictable game. Everything that we thought would happen, happened,” summed up Jimmy Greaves on Saint & Greavsie and it was hard to argue with his appraisal.

And the same pattern would occur when the return game took place at Wembley the following March as Ireland again equalised to draw 1-1. But before then England faced another post-Italia ’90 reunion when they hosted Cameroon in a Wembley friendly, with the memories still fresh of their enthralling quarter-final. The freezing weather was in stark contrast to the conditions in Naples the previous July but one thing that was similar was England again triumphed, with Gary Lineker doing the damage.

Euro 2000 was not the best of tournaments for England, although they had at least enjoyed a rare win over Germany. Less than four months later the sides would be meeting again in the last match played at the old Wembley, at the start of qualifying for the 2002 World Cup. 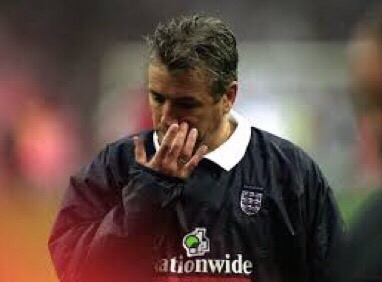 The meeting in the Euros was heavily criticised as a spectacle (notice the running theme here?) and this one was far from a classic too. Dietmar Hamann’s free-kick proved sufficient to give Germany victory and England’s farewell to the Twin Towers proved a damp squib. It marked the final straw for Kevin Keegan, who quit within minutes of the final whistle.

The Germans had once more come out on top at Wembley and England’s Euro 2000 victory already seemed a long time ago. But the following September’s return game in Munich would ultimately be the one England fans would choose to remember most from this trilogy of clashes with the Germans…

England’s Euro 2012 campaign ended at the quarter-final stage when they clung on to draw 0-0 against Italy before losing on penalties. They would quickly be reacquainted with the Italians, less than two months passing before they met in a friendly in neutral Berne.

Roy Hodgson selected a line-up that differed greatly from that fielded in the Euros, with five players making their debuts. With the Italians also missing several key players this was far from a rematch in the truest sense, but England did at least this time around emerge on top as they came from behind to win 2-1 with Phil Jagielka and Jermain Defoe netting.

England also faced another of their Euro 2012 opponents shortly after the tournament, playing Ukraine in a World Cup qualifier at Wembley in September. A late Frank Lampard penalty salvaged a draw for England.

England’s final group game of Euro 2016 was a forgettable 0-0 draw against Slovakia in St Etienne, ensuring progression to the last 16 for Roy Hodgson’s side but providing little else to celebrate. Yet again it had been a match to forget and there would be a swift reunion. 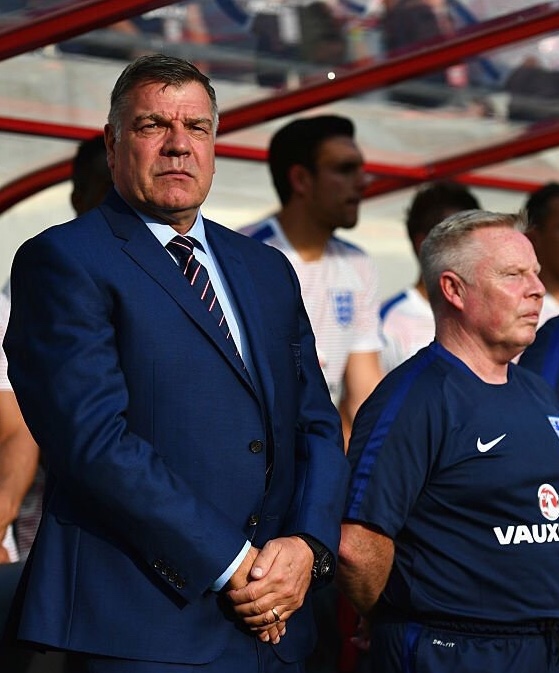 At the start of September England visited Slovakia for their first qualifier for the 2018 World Cup, with Sam Allardyce in charge for the first time. The side was still being captained by Wayne Rooney and had Joe Hart in goal, with it being more like the Euro 2016 team than the 2018 World Cup line-up.

Adam Lallana’s goal deep in stoppage time gave England victory and Big Sam was delighted about getting off to a winning start. But that would be that so far as his England managerial career was concerned…