Ahead of England facing the USA on Thursday we look back at their infamous meeting at the 1950 World Cup and recall how England fared during their first foray into the competition. As has often been the case at major tournaments since, English expectation was not met and they returned home earlier than hoped…

The words ‘Joe Gaetjens’ and ‘Belo Horizonte’ will forever take their place in the annals of English football – and not for the right reasons from an English perspective. On June 29, 1950, England – the nation that took the credit for inventing football and still liked to believe it was the world’s best – suffered a shock 1-0 defeat to the United States in the World Cup in Brazil.

It was a result to catch the eye. The USA were considered a total non-football nation who were there to be thrashed – an attitude still prevalent in some quarters until well into the 1990s – and England viewed themselves as the motherland of the sport. They had such celebrated players on the field as Tom Finney and Billy Wright and they were going into this game off the back of seven consecutive wins. A defeat was inconceivable.

But it happened. Regardless of whether it was due mainly to bad luck, poor planning by England or simply that Walter Winterbottom’s side weren’t as good as they liked to believe, England were shown up on the world stage. And almost seven decades later the outcome still gets mentioned with a fair degree of frequency, the result having arguably gained increasing significance with the passage of time…

Not the best of plans

Most of England’s early World Cup adventures would see their preparations criticised and this was particularly true in 1950. The side arrived in Brazil just days before their first game, having endured a lengthy flight and now facing limited time to acclimatise. Accommodation appears to have been booked blindly, with Winterbottom complaining about the facilities England stayed at. The side endured a particularly uncomfortable coach trip ahead of playing the USA and there was also the enduring problem of selectors dictating who was in the side, an issue that persisted for the remainder of Winterbottom’s long England reign.

But prior to setting out England were expected to do well and considered one of the favourites. “The lads are in very good spirits and we’ll be trying our very, very best to bring the World Cup back to England for you,” declared captain Wright as the side embarked on their World Cup adventure. They certainly had reason to feel optimistic, going into the finals having won six games in a row. But there had also been a couple of inklings that they weren’t invincible, having lost at home to both Scotland and the Republic of Ireland the previous year.

England had never entered the World Cup before and the finals had barely registered on the national consciousness. England winning various internationals against highly-rated sides meant they would be hailed as the de facto world champions, with the pre-war World Cups littered with significant absentees and certainly not seen – on British shores at least – as genuinely determining who the best sides in the world were. But after the Second World War, and with the home nations having rejoined FIFA, there was going to be British representation at the 1950 World Cup in Brazil.

The 1949-50 Home Internationals doubled up as a World Cup qualifying group, with England winning all three games to finish top. Scotland also qualified as runners-up but declined the chance to participate. England would be the sole British representatives, in a tournament that would contain just 13 nations. Hosts Brazil would be looking to win the World Cup for the first time, but England would fancy themselves to win a group containing Chile, Spain and the USA.

The England players in training ahead of the World Cup.

When England played their first World Cup match in Rio against Chile there was little hint of the woes that lay ahead. Stan Mortensen and Wilf Mannion were on target in a 2-0 win in front of less than 30,000 spectators in the vast Maracana. Millions of Brazilians were desperate to see their side triumph, but the sense of the overall World Cup being a footballing party – with thousands of neutrals going along to watch two foreign sides play – had yet to develop.

England walked off the field having beaten Chile, but amazingly this would be their only victory at a World Cup in Brazil in either 1950 or 2014. A day to forget against the USA would define their tournament…

Attention turned to facing USA in Belo Horizonte. The apparent gulf between England and the USA was illustrated by the American players being semi-professional and holding down other jobs. But their opening match at the World Cup had seen them prove they were not just there for a sightseeing tour of Brazil, looking like they might shock Spain before losing 3-1.

A figure of interest in their line-up was Ed McIlvenny, who was born in Scotland and had briefly played in the Football League with Wrexham before moving to United States in the late 1940s. In a scenario similar to what happened with the Republic of Ireland four decades later, criticism would be thrown at England’s opponents for having selected players who were not born in the country they were representing. But USA were within their rights to pick players such as McIlvenny and Haiti-born Joe ‘Larry’ Gaetjens, who was about to etch his name into international football folklore.

The American side had gained experience of what lay in store when they faced an England touring team containing Stanley Matthews in New York ahead of the finals, only losing by one goal (it was not treated as a full international by England). While that was some way off being the full England side, the fact that USA had not been thrashed should perhaps have acted as a warning sign that they weren’t going to be pushovers.

The veteran Matthews was left on the sidelines for the World Cup clash, supposedly rested for the tougher tests that lay in store. It had not gone down well with his adoring public, with John Thompson writing in the Daily Mirror: “A trump card is of no value until it is put on the table. England hold one in the World Cup – and they are wasting it.”

Matthews, who hadn’t played against Chile either, watched on as a footballing sensation developed before his eyes. England continually went close early on and it seemed just a matter of times before the floodgates opened. But USA weathered the storm and a few minutes before the break came their moment. A shot by Walter Bahr was turned in past Bert Williams by Gaetjens and USA were ahead.

The key moment as Joe Gaetjens puts USA in front.

Amid public support for the underdogs in Belo Horizonte, USA continued to hold the lead. England pressed and would appeal for a penalty, also claiming that a shot had crossed the line. But neither decision went their way. It was becoming increasingly clear their luck was out as USA stood firm. “I think if we’d played for 24 hours we’d have never scored. It was one of those days,” reflected Matthews, who must have wondered how much of a difference he could have made.

The game was ebbing away from England and USA even almost added a second late on. Alf Ramsey – just 16 years away from the ultimate England managerial glory – had to clear a Frank Wallace effort off the line to keep his side in with a shout. But it was too late. The final whistle would soon sound and England were stunned. “We just wanted the ground to open up and for us to go in because it was disastrous,” Wright would say many years later. He made more than 100 appearances for England and considered this the biggest humiliation in his international career. 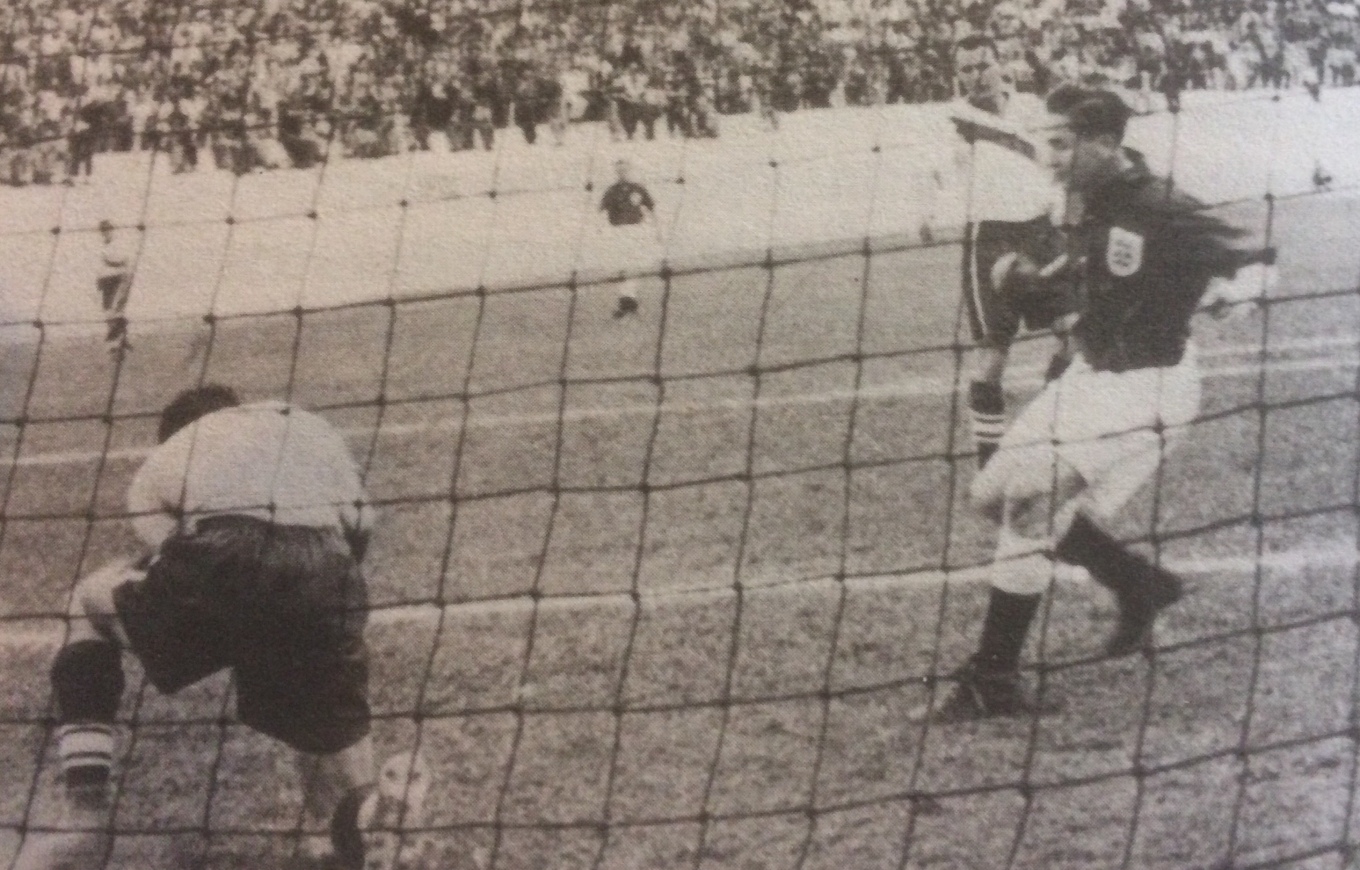 England were to continually be thwarted by USA.

The American players were carried off the field by enthusiastic spectators, while England trudged away and the reality of the result would hit home. In the present day a shock England defeat at the World Cup would make front page news, but the geographical location of the finals, technological limitations and the fact the tournament had yet to really establish itself in the British mindset meant coverage was limited. Amid plenty of coverage of summer sporting favourites cricket and tennis, a short report on England’s World Cup shock was buried in a column in The Guardian, where it was said to be “probably the worst display ever by an England side”.

Stories would abound of newspaper offices being convinced the 1-0 scoreline that came their way was a misprint and that England must have won 10-1. If that sounds like English arrogance, it’s worth noting that the next four meetings between the sides saw England score 29 goals. Those results would only serve to emphasise the magnitude of the shock and also that bad luck had been a key factor in England’s defeat. “I think a fair result would have been 12-1,” Williams would later rather harshly claim, which overlooked how close their opponents had come to adding a second goal.

England were humiliated, but not yet out. A win over Spain in the Maracana would see the sides both finish on four points and necessitate a play-off. Matthews was finally selected in the number seven shirt. Another celebrated name of his era, Jackie Milburn, was picked at number nine, with Eddie Baily making his debut alongside him in attack. The England players were still hopeful, but a plane was on standby to take them home two days later if they failed to win.

And the team would duly be flying back to England far earlier than hoped. In scorching conditions there was a better display from England but the outcome was familiar, with Telmo Zarra’s goal early in the second half proving decisive and ensuring Spain finished with a 100% group record. England finished four points adrift, level with Chile and the USA (who Chile put five past in their final group game). This really was an instance of first being first, second being nowhere.

The tournament was uniquely settled by a final group stage. As if to emphasise how far off winning the competition England had been, Spain finished bottom of the final group and were beaten 6-1 by Brazil along the way. But Uruguay would stun Brazil to win the decisive match and the tournament.

England were long back home by then. It was a reality check and, while some mitigation could be put forward, there was little question that England had not delivered as hoped. “The shock of England’s hasty exit from the World Cup has emphasised that continental and western nations have outstripped us – both in football ideas and in technical ability,” wrote Thompson. They are sentiments that have often been repeated in the ensuing decades.

England still clung to its sense of greatness for another three years, until Hungary came to Wembley and walked away as 6-3 winners after playing the hosts off the park. The USA defeat had been widely dismissed as a fluke, but this result by contrast was a sharp indicator that England had no right to consider themselves the greatest in the world. The warning signs had been there out in Brazil but that had been out of sight, out of mind. The Hungary game at Wembley, however, was a public humiliation.

English football was starting to get a reality check on the international stage. And more woes would be suffered in the years that followed…