In the latest part of our recollections of England’s fortunes 30 years ago we focus upon this week in 1988, when Bobby Robson’s side made a friendly visit to Saudi Arabia. It would lead to pressure growing on the boss and result in a particularly memorable tabloid headline being printed at his expense…

For all the groans that appear on social media whenever the international break arrives, England matches in November are – rightly or wrongly – as much a part of the sporting calendar at this time of year as the FA Cup first round, the autumn internationals in rugby union and England’s cricketers embarking on their winter tours.

Since 1946, England have played at least one match in November each year except 2002, when the decision was taken to take a break following an arduous World Cup trip earlier in the year. The month has traditionally been a strong one for England, with the players having got into their stride more than earlier in the season and not feeling burned out like later in the campaign.

And so it was 30 years ago that Bobby Robson looked to ensure England played in November, during a free month in terms of World Cup qualifying. But it sums up how difficult things were for him back then that there were numerous problems arranging a friendly. The international calendar as we know it now did not exist, which limited the number of available sides on November 16. A planned trip to Italy looked ideal in terms of facing quality opposition and getting a flavour for how Italia ’90 would be, but the threat of trouble was such that it was sadly seen as a risk not worth taking by England in the wake of hooliganism involving a section of their followers during Euro ’88.

The next plan was to visit Morocco, who England had met at the 1986 World Cup. But problems emerged over finalising the details so that match was scrapped too in the weeks ahead of the game. With England tied to playing home games at Wembley – where there had been a poor turnout for the most recent friendly against Denmark – there was reluctance about arranging a match on home soil in the month, so there was a genuine concern England would not play again in 1988 after the World Cup qualifier against Sweden in October.

But then an opening emerged – and an unlikely one at that. England were to venture to Saudi Arabia, with it being reported the Saudis had put up a cash guarantee to help encourage England to make the long trip. The team would fly on Concorde to help limit the time away, with the game sandwiched between domestic matches on the weekends before and after. 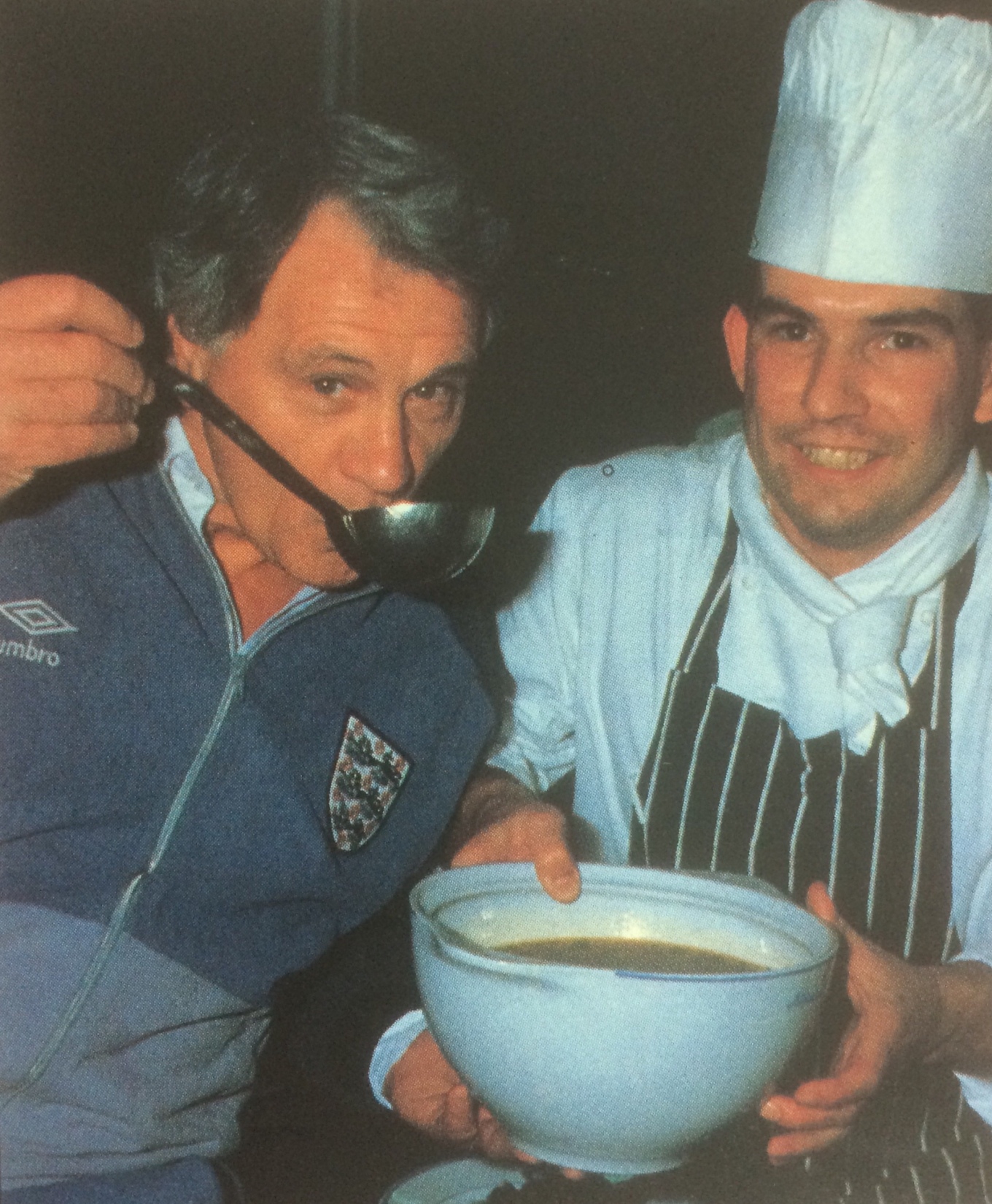 Bobby Robson enjoys the local cuisine more than what would be served up by the tabloid press in the days following the match.

David Lacey wrote in The Guardian on the day before the game: “No international is a complete waste of time, but some games have less point than others. England are playing against Saudi Arabia in Riyadh tomorrow for a variety of reasons. Football is not at the top of the list.”

A hiding to nothing

Bobby Robson was just glad to have a match arranged, as he argued that Saudi Arabia would crucially offer a similarity in style to World Cup qualifying opponents Albania. But allies in international football management – most notably Andy Roxburgh, whose Scotland side had drawn with Saudi Arabia earlier in the year – tried to talk him out of the trip. Roxburgh warned him of how the Saudis would be difficult opponents and could spring a surprise. He added that if England won they would get no credit and if they didn’t it would provide further ammunition for Robson’s critics. A friendly or not, England were on a hiding to nothing.

As if that wasn’t enough, Robson had to contend with withdrawals. Injury concerns led to Nottingham Forest’s Steve Hodge and Des Walker not being involved, while Robson was unhappy that Rangers would be in action on the same night – meaning the likes of Terry Butcher, Gary Stevens and Chris Woods would be unavailable. This would be an unfamiliar England side, with John Barnes among the other absentees.

Robson had seen the impact Arsenal’s English-dominated side were making, with the title chasers having impressed in a match shown live on ITV 10 days earlier when they won 4-1 at Forest. Under-21s international Michael Thomas would earn his first cap, with Robson saying: “I think he can handle the senior stuff but that remains to be seen.” He would accompany Arsenal colleague David Rocastle – who had appeared just once before – in midfield. Established squad member Tony Adams was once more picked at the heart of the defence. On the bench were fellow Gunners Alan Smith and Brian Marwood, who were each looking to earn their first caps.

The line-up certainly looked ‘experimental’, Robson having made changes that he had largely resisted during the previous friendly against Denmark two months earlier. Goalkeeper David Seaman (QPR) and right-back Mel Sterland (Sheffield Wednesday) were making their debuts, while central defender Gary Pallister (Middlesbrough) had only played for England once before. However, the rest of the side was more familiar. Stuart Pearce (Nottingham Forest) was establishing himself as regular left-back, while captain Bryan Robson (Manchester United), Peter Beardsley (Liverpool), Gary Lineker (Barcelona) and Chris Waddle (Tottenham Hotspur) were international regulars. Waddle’s Spurs’ colleague Paul Gascoigne was once more on the bench. 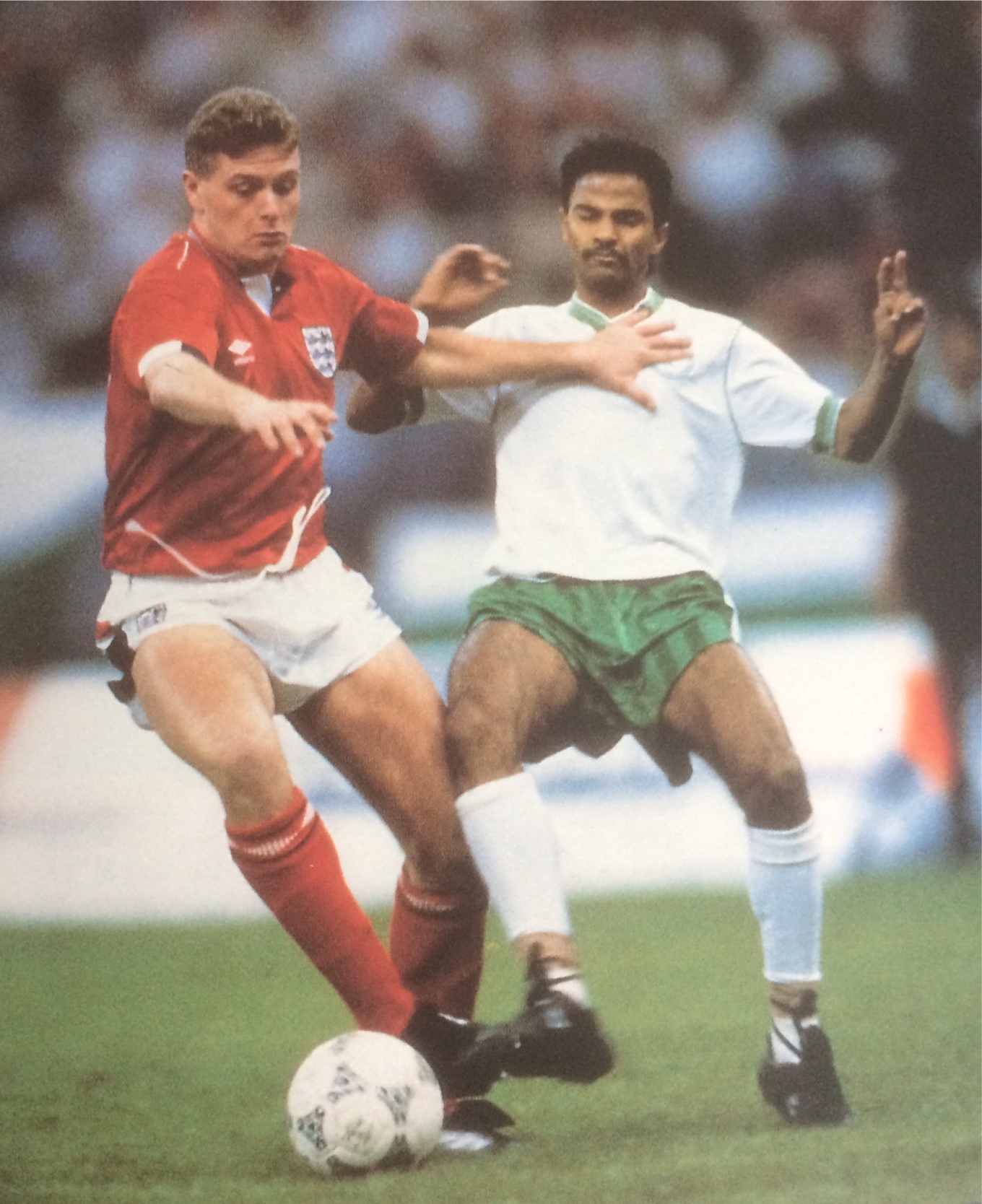 Paul Gascoigne made only a brief substitute appearance.

The match was being screened live on BBC2 on a Wednesday afternoon, with the 4pm  (UK time) kick-off delayed slightly as Steve Rider told viewers that prayers were taking place in Riyadh. Bobby Robson was probably tempted to join in, knowing that a bad result would see the pressure on him intensify. The BBC’s wait for the start was filled by a few minutes of ‘highlights’ from the previous month’s frustrating 0-0 draw against Sweden being shown, acting as a reminder of the side’s continued failure to tuck chances away.

And out in Saudi Arabia that trend would continue. England could quite feasibly have walked off the field having won comfortably, but it summed up their 1988 that they did not. With Saudi Arabia led by Omar Borras – who had been in charge of the Uruguay side that had won few friends in Scotland at the 1986 World Cup over their approach – there was little chance of them rolling over and letting England stroll to victory. They competed well and confirmed Roxburgh was right about the threat they posed.

Robson could certainly once more point to fortune not being on his side. After 15 minutes Pearce played a ball through that the referee was unable to get out of the way of. Saudi Arabia quickly swept up the field, with Majid Abdullah using his pace to cut inside the England defence and shoot. Seaman managed to get a hand to the ball but was unable to stop it crossing the line.

It certainly felt like England’s luck wasn’t in during the first half. Pallister went close with a header from Sterland’s long throw; Adams headed in but the goal was ruled out for offside; the same fate would befall Lineker when he converted from close range; and Beardsley’s sidefooted effort struck the crossbar.

England on another day would have had the game won by the break, but instead they trailed 1-0. It may only have been a friendly, but this was a scoreline that would trigger serious criticism – something Robson could ill-afford as he looked to end a difficult year in winning fashion. England had averaged less than a goal per game in 1988 and this match was summing up their year.

But there was also a concerning uncertainty surrounding England’s defending, summed up during the second period when Sterland’s clearance struck Abdullah and almost flew into the net. England were still trailing nine minutes into the second half and BBC commentator Barry Davies started drawing comparisons with the 1950 World Cup humiliation against the USA as a free-kick was earned on the left flank. Adams was on hand to head it in and there was a sense of relief among the England party. James Lawton in the Daily Express would criticise the Saudi Arabian substitute goalkeeper Khaled Al-Sabiyani, saying that it was “a goal that might have been stopped by a goalkeeper operating in a schoolyard”. But they all count and this was desperately needed good fortune for England. 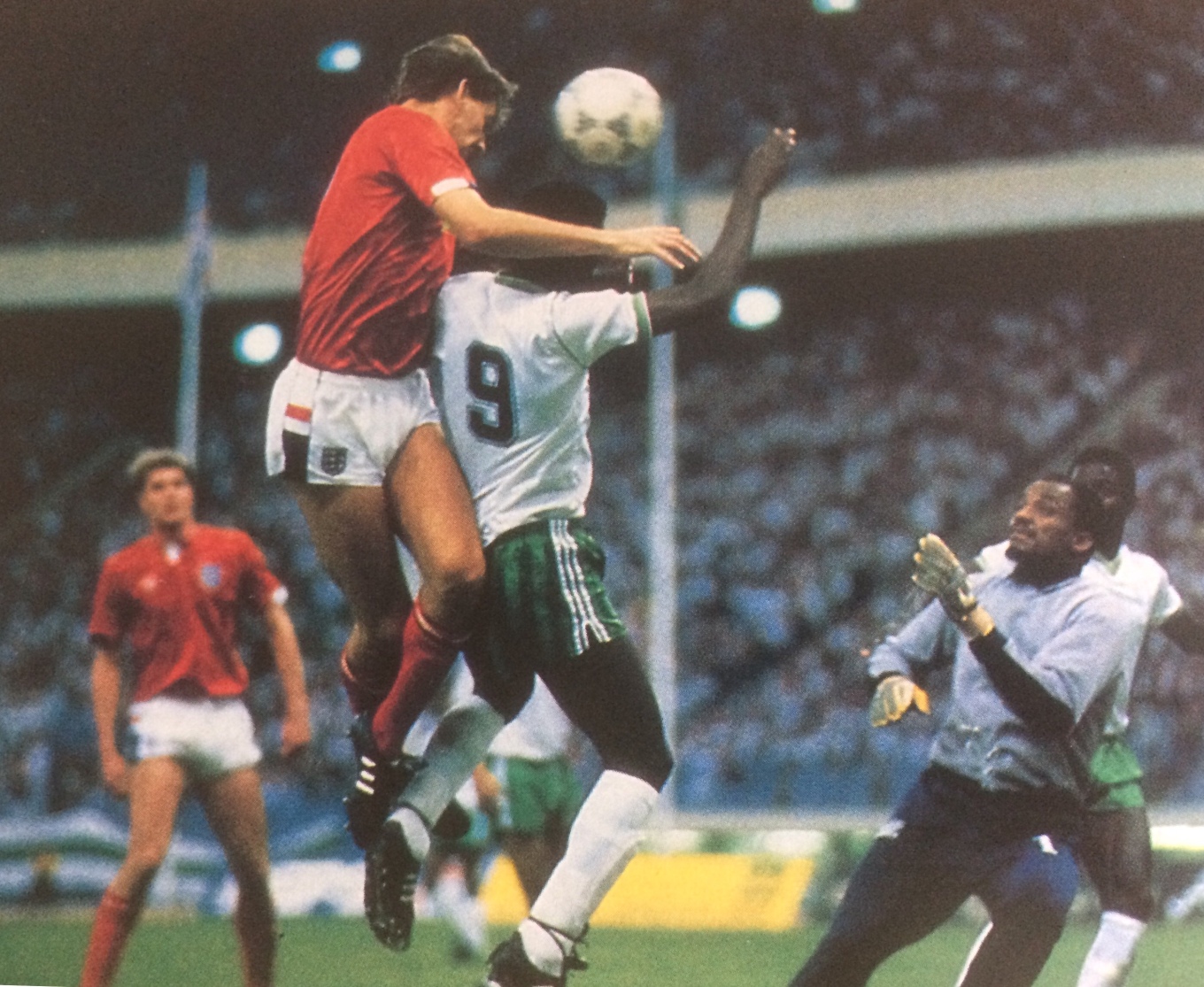 That goal might have been seen as the prelude to England going on to claim the win, but they didn’t. Lineker found the net with an uncharacteristic overhead kick but the goal was yet again disallowed for offside. But there was little other zest shown in the last half hour as, despite Gascoigne, Marwood and Smith all coming on in the closing stages, the game meandered to a 1-1 stalemate.

“They came to a desert. They got lost. And they couldn’t find, really I think, any oasis,” said Davies of England’s performance as the final whistle sounded. The criticism was instant, Robson becoming agitated over the line of questioning when interviewed on the pitch afterwards (he would the following day call Davies “impertinent” for having questioned the limited time Marwood was afforded on the field). He noted the irony that the result was suddenly important to the media, when he had previously been told to make sweeping changes and experiment as friendlies meant little.

Robson found himself surrounded by the press pack as England arrived home the following day, with savage attacks having already been printed. The Sun and the Daily Mirror were embroiled in a circulation war and seemed desperate to outdo each other in the ‘Robson must go’ stakes. ‘England Mustafa new boss’ screamed out from the former, while the latter memorably declared: ‘Go! In the name of Allah, Go!’ 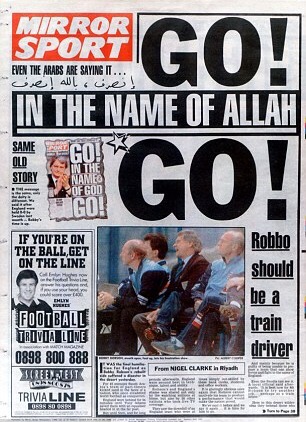 Whatever one’s preferred reading material in those pre-internet years, they would likely have found anti-Robson content. Even some who normally afforded him sympathy seemed to be running out of patience. “The nightmare continued for Bobby Robson last night but he will wake up today with his job as England manager as secure as ever,” wrote Steve Curry in the Daily Express. “The desert draw in Saudi Arabia, a nation still learning the game, may have been less than England deserved. But that is little consolation to an increasingly discontent public.”

Express stablemate Lawton went further, writing: “Robson says that he will fight on and prove himself. But he doesn’t fight on. He staggers on, frozen in some quaint belief that it is his army of critics who are badly out of step.” And these were among some of the more considered views in the tabloid press, as the attacks poured in and in some cases were very personal. It may have only been a friendly, but it was one that hadn’t helped Robson’s reputation at all. 1988 was drawing to a close for England, and it was a year Robson was glad to see the back of. The goals had dried up, Euro ’88 had seen England flop and the press pack were increasingly after him.

One thing the trip to Saudi Arabia did seem to do was help Robson make his mind up on certain players. Robson would never give another cap to Adams, Marwood, Pallister or Sterland, while Thomas would have to wait more than a year for his second and final England appearance. Beardsley was about to find himself dropped to the bench, where Gascoigne continued to wait to be handed his first start. England’s next game in Greece in February 1989 would see a more familiar line-up selected, but Robson remained under attack from the tabloids…

From wooden spoonists to World in Motion

3 thoughts on “From Wooden Spoonists to World in Motion: Part 4 – November 1988” Leave a comment ›