This has been a positive year for the England team, having achieved a semi-final placing at the World Cup, made progress in the UEFA Nations League and enjoyed a reconnection with the English public. But there has also been sadness over the deaths of a number of former England players. On an alphabetical basis, we start paying tribute to them today…

Despite the fact he skippered more North-Eastern clubs than he received England caps, Stan Anderson could forever feel pride that he was a member of a World Cup squad. So many other players never get that opportunity and it was a justified reward for a respected career in the game.

The long-serving Sunderland player, who had earlier represented his country at under-23 and B level, finally made his full England debut at the age of 29 in April 1962 when he wore the number four shirt in a 3-1 win over Austria at Wembley. He retained his place for the next game when England lost 2-0 away to Scotland. He was never capped again but had done enough to earn his place in England’s 1962 World Cup squad in Chile, watching on from the sidelines as the side reached the quarter-finals.

Anderson, who died in June at the age of 85, made more than 400 appearances for Sunderland before switching to rivals Newcastle United and concluding his league career at Middlesbrough as he completed the North-East trilogy. Regularly selected as a captain in his career, Anderson’s leadership qualities led to him embarking on a managerial career with Middlesbrough, AEK Athens, QPR, Doncaster Rovers and Bolton Wanderers.

It’s a recurring theme of players we are paying tribute to this year that their England careers could have panned our very differently but for injuries. It is not inconceivable that on July 30, 1966, Jimmy Armfield would have been the man captaining England in the World Cup final rather than Bobby Moore.

A wonderful one-club man with Blackpool, Armfield graduated from the England under-23s to the senior side in 1959. He made his debut in a 2-0 away defeat to world champions Brazil at left-back, but it would be at right-back that he would make the vast majority of his appearances and impress. This was particularly true at the 1962 World Cup in Chile, where he won strong praise for his performances for England. 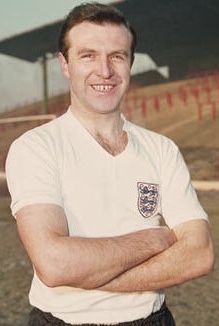 Armfield soon became the regular England captain and looked to be the man who would skipper Alf Ramsey’s side in the 1966 World Cup on home soil. But he was usurped as right-back by George Cohen after a spell out injured in 1964, with Moore now entrusted as captain. It wasn’t the end of Armfield’s England career, but things would never be the same again.

After two years without a cap, Armfield’s 1966 World Cup hopes were boosted by appearing in friendlies against Yugoslavia and Finland (captaining the side on both occasions in Moore’s absence). But he sustained another knock in the latter match and it would be his 43rd and final cap. He remains one of just 22 men to be in an England squad that won a World Cup at senior level, but he was left wondering what might have been. He was effectively the captain of the ‘other XI’ who didn’t play in the final and had to wait until 2009 for their medals.

Forever a footballing gentleman, Armfield didn’t let any personal disappointment at missing out on the final stop him joining in the celebrations afterwards. Wanting to play was natural, but Armfield could see the bigger picture and bore no resentment and would later state: “Isn’t it just better that we won?”

With Ramsey now casting his mind to the 1970 World Cup, Armfield was never capped again. He continued playing for Blackpool until 1971, having amassed 569 league appearances. His managerial career saw him win promotion at Bolton Wanderers and take Leeds United to the European Cup final in 1975, as he provided some welcome stability at Elland Road following Brian Clough’s turbulent reign. But his footballing roles lasted long beyond that, moving into the media and remaining a respected radio summariser until late in life. Listening to matches on 5 Live will never quite be the same again.

And his standing within the game was such that he would act as a consultant for the FA, with this role seeing him take much of the credit for the appointment of Terry Venables as England boss in 1994. Armfield’s death in January at the age 82 led to the tributes pouring in for a man admired as both a footballer and an individual.

The life of Kevin Beattie was rarely dull, a rags to riches story that did not always pan out quite as hoped but still brought moments to treasure. It certainly wasn’t always easy for him. He had grown up in poverty as part of a large family; during his playing career he was dogged by injuries; and in later life he would have to contend with health problems. But his footballing abilities would earn him many admirers, especially at Ipswich Town where he spent the vast majority of his career.

Cruelly, persistent injuries would deny him enjoying the glittering career he could so easily have had. But he would still achieve more than most players can only dream about.

Beattie made his debut for Ipswich as a teenager in 1972 and within weeks would make his way into the England under-23s squad. It was a measure of the defender’s abilities and potential. His failure to show up for an under-23s match away to Scotland in December 1974 made headline news, the player insisting he just wanted a rest as he felt “shattered” and he expressed hope that England manager Don Revie “understands how I feel”. He evidently did, awarding Beattie his first full cap the following April against Cyprus. He would seize the opportunity.

In May 1975 Beattie marked only his third cap by scoring a superb looping header for England in a 5-1 win over Scotland and it seemed a bright international future was in store. But fate was to cruelly intervene. Injury woes would soon start to take hold and a substitute appearance against Luxembourg in October 1977 would constitute his ninth and final England cap. It seemed a significantly low tally for such a respected player. With the side enduring a barren decade, he would never grace a major tournament.

He remained at Ipswich, winning the FA Cup in 1978. But his knee injuries were continually worsening and he would receive a series of cortisone injections in a bid to stem the problem. His manager Bobby Robson regarded Beattie as being as good as any player this country has produced. But for injuries there is little doubt that Beattie would have formed a key part of Robson’s England squad when he took over as manager in 1982.

But by then it was almost over. Shortly before Christmas 1981, his retirement was announced as the injury nightmare showed no sign of abating. Although he would reverse the decision and turn out briefly for Colchester United and Middlesbrough, as well as a series of non-league and overseas clubs, his days at the top were in the past. It’s hard to escape the feeling of what might have been.

Beattie died suddenly in September, aged 64. He had a tough life, where the hand he was dealt was rarely kind. But his football talents remain rightly treasured by those who watched him. A campaign for a statue in his honour outside Ipswich’s Portman Road home will hopefully come to fruition and it seems a fitting tribute to such a fine player.

Prior to 2005, Chelsea had been English champions just once. That was 50 years earlier, during a campaign of triumph for Roy Bentley. Not only did the forward captain Chelsea to the league title, but he would return to the England side after two years away and the goals would flow.

Bentley was the last surviving member of the 1950 England World Cup squad until his death in April, at the age of 93. He had marked only his second cap by scoring the winner against Scotland in April 1950 and during the finals he would appear in the win over Chile and the infamous defeat by the USA. But he would make just two more appearances over the next four years before he returned to the England fold against Wales in November 1954, at the age of 30.

Having scored three England goals in his previous eight caps, he now doubled his tally with a hat-trick in the last 20 minutes in a 3-2 win. He would also find the net during the season against West Germany, Spain and Portugal, meaning he unusually netted on all his final four appearances for England and finished with a notable tally of nine goals in just 12 caps.

Bentley also had a strong goalscoring record at Chelsea, for whom he netted 130 goals in 324 league appearances from 1948 to 1956. He would also play for Bristol City, Newcastle United, Fulham and QPR, in a career which did not properly begin until he was 22 due to the Second World War. He certainly made up for lost time.

Following on from Jimmy Armfield, another true one-club man we lost this year was Paul Madeley. He spent his entire career at Elland Road and he would prove a versatile figure by performing in numerous positions. His strengths did not go un-noticed as he was capped 24 times by England from 1971 to 1977. Sadly for him and his contemporaries, his time at the top would coincide with the England team being in decline.

Despite having yet to win an England cap, Madeley was considered for the 1970 World Cup squad as defensive cover. But he expressed his wish to remain at home and rest after a particularly demanding season with Leeds. Sir Alf Ramsey evidently didn’t hold this against Madeley as he was handed his England debut against Northern Ireland the following May. He would become a trusted squad member and enjoy a spell in the side as regular right-back.

Although he was never to play in a major tournament with England, Madeley did feature in the Euro ’72 quarter-final against West Germany which was played over two legs. The following year he was involved in England’s World Cup qualifying campaign, playing in the infamous draw against Poland as the side missed out a place in the World Cup.

Leeds boss Don Revie’s appointment as England manager in 1974 helped Madeley’s England prospects and he handed him his first England cap for almost a year against Czechoslovakia in October 1974. His final appearance came in the defeat by Netherlands in February 1977 at the age of 32.

Madeley, who sadly had to contend with health problems in later life, died in July, aged 73. The respect he commanded thanks to his distinguished career was evident from the tributes paid to the man regarded as the ‘Rolls Royce’ at Leeds.