We resume our recollections of England’s fortunes 30 years ago by focusing on an away friendly in Greece this week in 1989, as Bobby Robson felt increasing pressure from sections of the press but his namesake helped ensure the manager escaped being “fried”…

In the most recent blog post in this series, we recounted how a friendly draw away to Saudi Arabia in November 1988 had led to increased calls for the departure of Bobby Robson. He resisted them, but after a three-month hiatus he found himself back in the firing line as England’s first game of 1989 saw them face Greece in Athens on February 8.

In some respects this seemed like a low-key game that wouldn’t really matter, certainly when compared to the World Cup qualifying matches beckoning in the coming months. With it being played on a Wednesday afternoon in front of a sparse crowd dotted around the Olympic Stadium it had the feel of a reserve fixture and the BBC would only start broadcasting live at half-time after Neighbours had finished.

With a full programme of domestic matches being played the weekend beforehand – including Manchester United against Tottenham Hotspur being live on ITV on the Sunday afternoon – there was little time for Robson to work with his side in the build-up, a complaint he would frequently have cause to make during his reign.

But the reality was that the pressure was on England and Robson knew it. He wrote in 1990: “I have never seen so many journalists and TV crews for a friendly, all hoping that we lost so that they would have their story of Bobby Robson going.” The press pack seemed to be a story in themselves, the BBC sending a film crew to monitor their movements on the trip. And some comments made on camera would add to Robson’s suspicions.

“Robson will be fried”

“There are number two football writers, if I may use that collective expression, who are here specifically to do the job on Robson should it be necessary,” admitted seasoned Daily Express reporter Steve Curry when interviewed. The vultures seemed to be circling – with one in particular getting ready to swoop.

Although several newspapers would target Robson during his reign, it’s fair to assume one he held in particularly low regard was the Daily Mirror. Amid a circulation war with The Sun it would see ‘Robson out’ stories as a good seller and in 1985 the Mirror ran a front page story demanding his departure. It had carried articles in which Sir Alf Ramsey criticised Robson’s selections and following England’s failings at Euro ’88 had been both vociferous and persistent in declaring the manager should depart. And then there was the football writer Nigel Clarke. 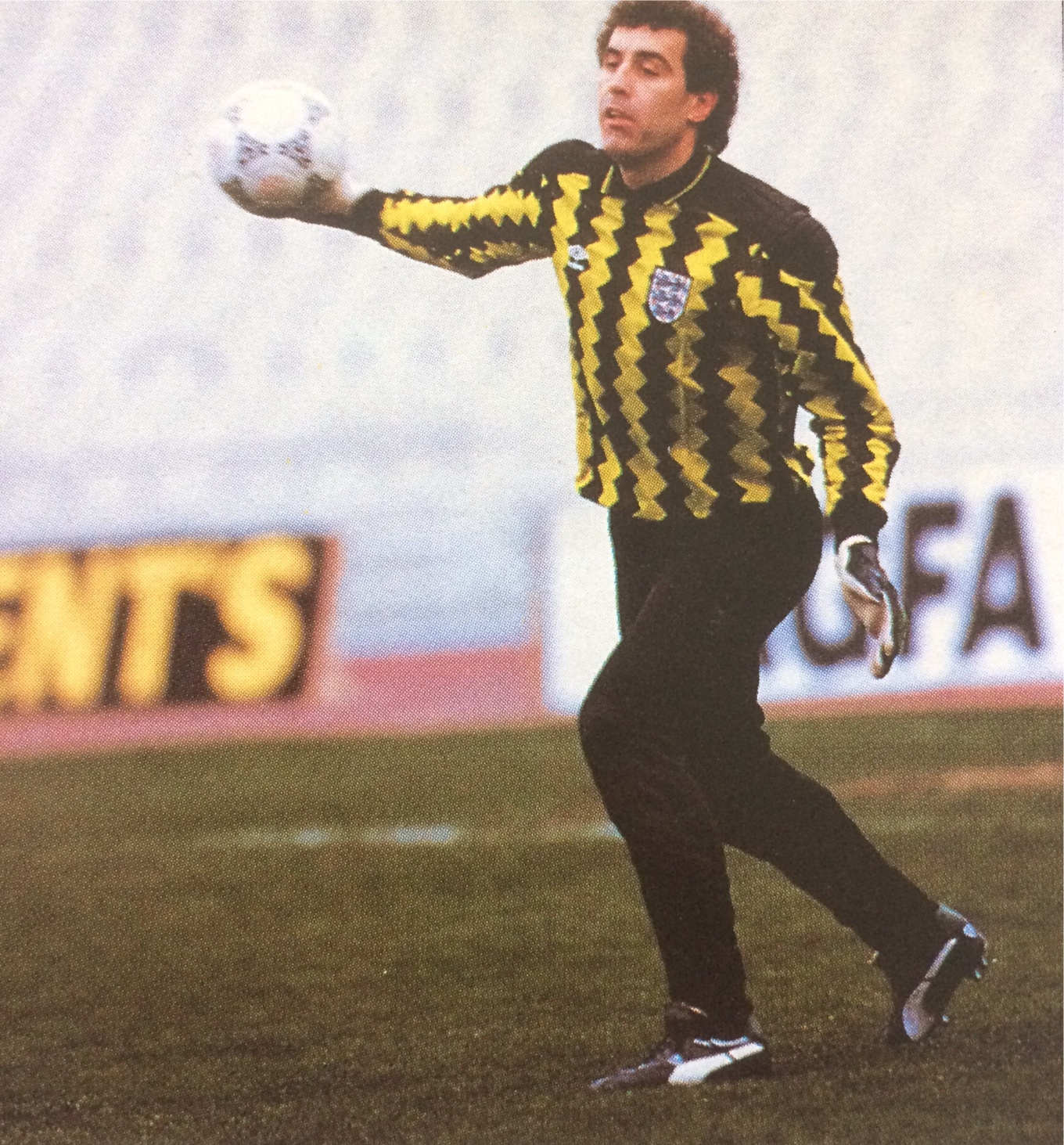 Peter Shilton kept goal for England against Greece. The empty seats behind him summed up the very low attendance.

Clarke was not responsible for writing the brutal headlines about Robson in the Daily Mirror. But his byline would invariably appear in the stories underneath them and he wasn’t exactly championing the manager’s cause. “I don’t feel any remorse about what I wrote about Bobby because I couldn’t understand why he made the decisions he made [and] chose to play the way he did. And so, yes, I got into his ribs. That’s my job,” he said in an ITV retrospective documentary about Italia ’90 in 2010.

And Clarke was about to incur Robson’s wrath more than ever ahead of the Greece game. In a TV interview, Clarke referred to how Greece had never scored against England but if they now delivered then “Robson will be fried”. The manager recounted the words differently – stating that Clarke had said he was “here to fry Bobby Robson” – but the basic gist was the same, that Robson was to feel the full force of the tabloid press if England slipped up in this friendly.

Clarke would state later that he and Robson made their peace after Italia ’90 and he would join most of his press box contemporaries in paying tribute to Robson when he died in 2009. But if Sir Bobby forgave then he certainly didn’t forget. On numerous occasions over the next couple of decades he would bring up Clarke’s words during interviews about his time managing England, seeing them as epitomising what he had to go through with the press.

And that press coverage had regularly included calls for Brian Clough to get the job instead. But, more than a decade on from being interviewed for the role in 1977, his lingering chances of getting it were now as good as over after he’d been caught on camera throwing punches at pitch invaders after Nottingham Forest’s League Cup win over QPR. There was no way the FA would consider him now, if they ever had in the first place. But that didn’t mean Robson got an easier ride. It may have been less clear-cut now who the popular choice would be to manage England if he departed, but Robson was still at risk of being “fried”.

Robson had fielded an experimental side away to Saudi Arabia and it had not paid off. Now the team he would select in Athens was more familiar. Peter Shilton was back in goal, with Gary Stevens, Stuart Pearce, Des Walker and Terry Butcher in defence. Bryan Robson would captain the side from midfield, with Neil Webb, David Rocastle and John Barnes also selected. Gary Lineker was looking to end his England goalscoring drought in attack, where his choice of forward partner was significant – with Alan Smith given the nod over Peter Beardsley as the side reverted to utilising a big man in attack. Goalscoring had been a problem in 1988 and it was hoped this move could pay dividends. 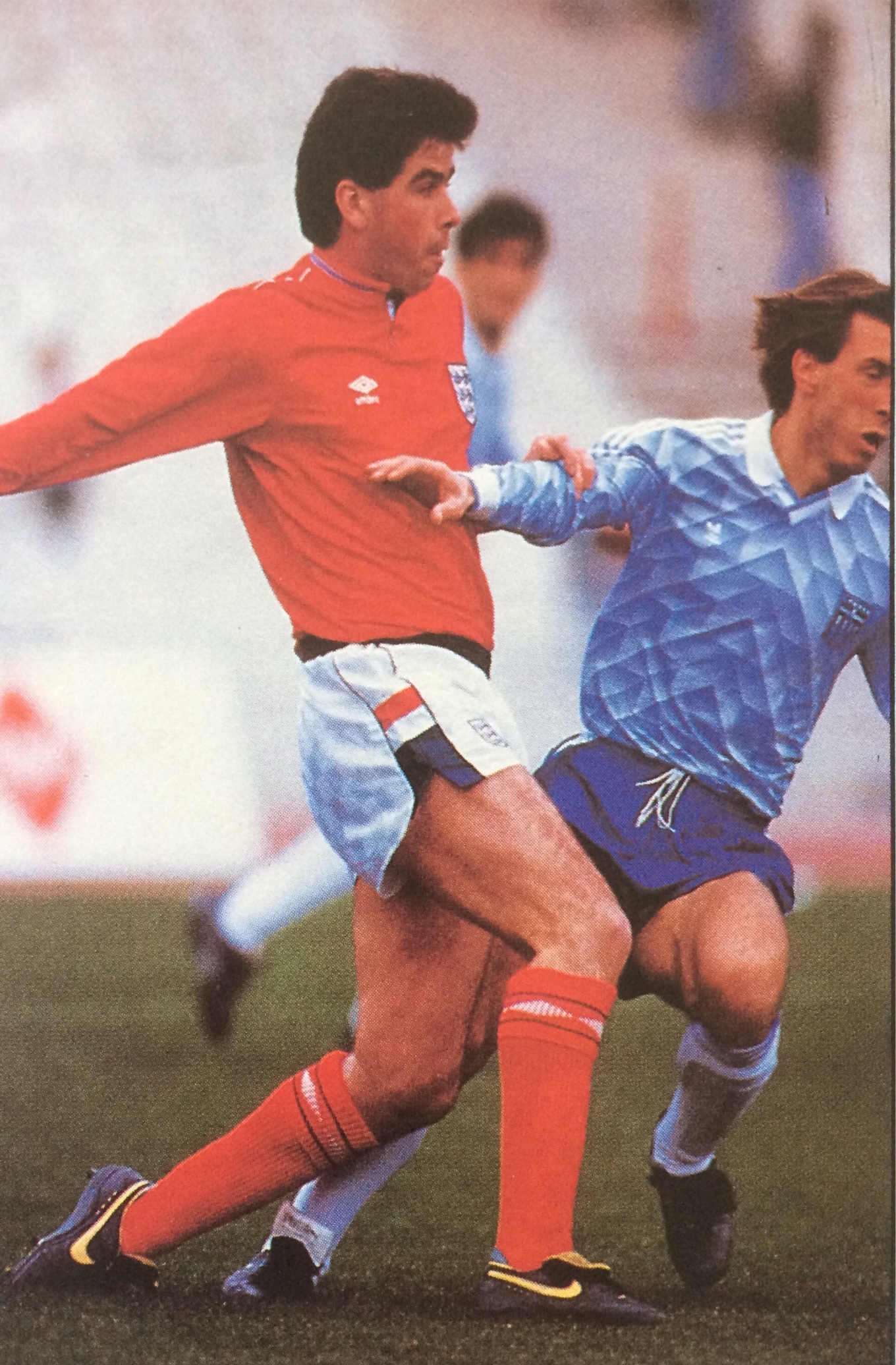 Neil Webb in action for England against Greece.

“I’m not putting the blame on Peter Beardsley because taking chances is the responsibility of a group of players,” said Bobby Robson. “But Lineker and Smith will give us the option of an aerial ball.” The pair had previously forged a good partnership at Leicester City and Smith, whose only previous England appearance was as a substitute in Saudi Arabia, was playing a key role in Arsenal’s title pursuit. It seemed like a gamble worth taking.

Clarke wouldn’t have to wait long to get his frying pan out. Although much was being made of the fact Greece had never scored against England in four previous meetings, they had earned a 0-0 draw at Wembley in March 1983 and qualified for the 1980 European Championship. They were some way off being among European football’s elite, but nor were they a minnow in the mould of Luxembourg. Greece were, perhaps, the sort of opponent for whom the ‘no easy games in international football’ cliche applied. As if to underline this, their under-21s beat England the day before the senior sides met.

Within a couple of minutes it looked like they might be on for the scalp of England at full level too. The hosts were awarded a penalty after Butcher was adjudged to have committed a foul in the area, with Dimitris Saravakos converting past Shilton. But England would quickly respond, a John Barnes free-kick going in off the back of goalkeeper Spyros Ikonomopoulos after hitting the bar. However it proved a struggle thereafter, with the game appearing to be meandering towards a draw – and inevitable criticism towards the manager – going into the final 15 minutes. 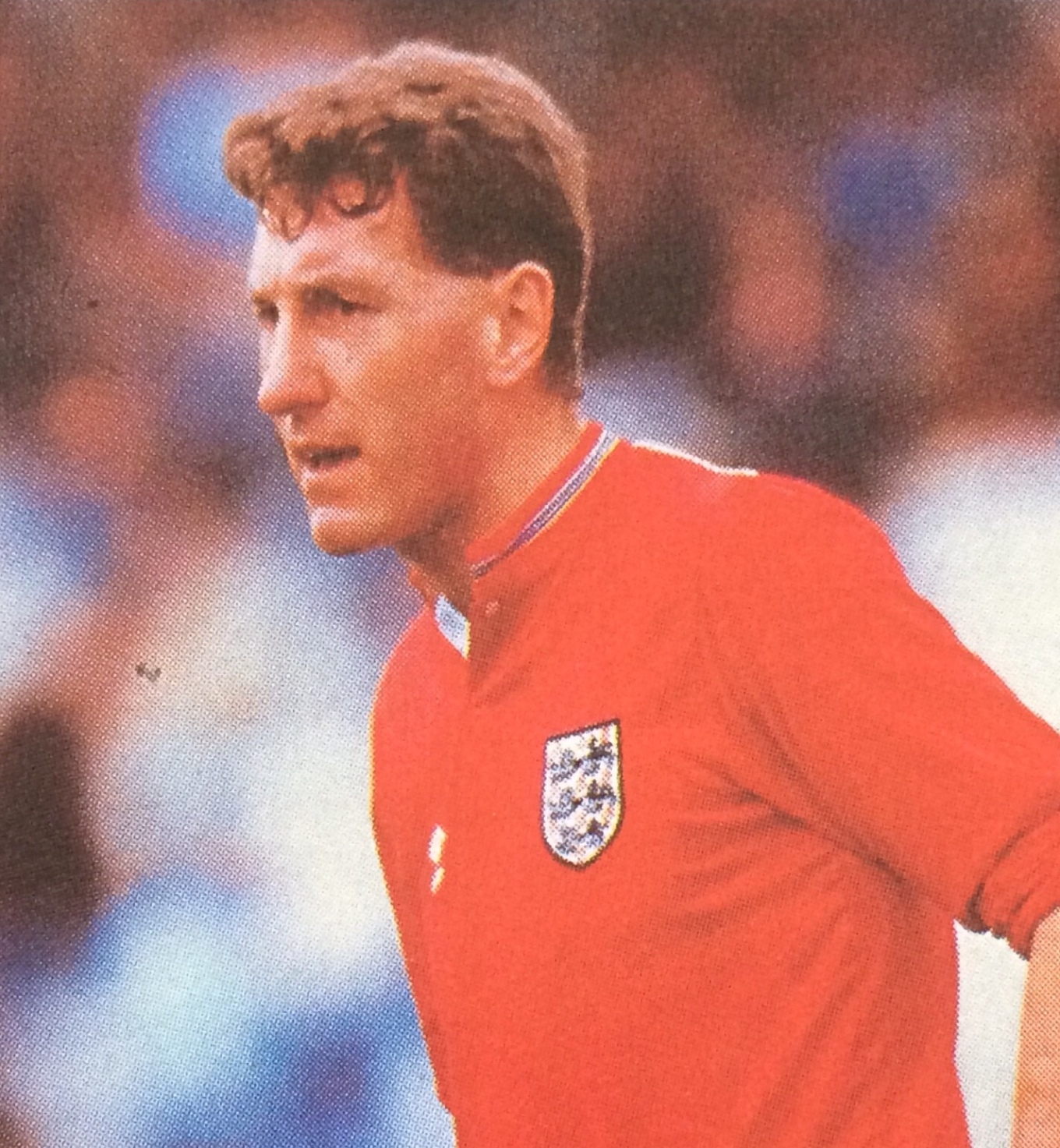 Greece were awarded a penalty after Terry Butcher committed a foul inside the area.

With 12 minutes left Beardsley was brought on for Smith and a minute later the winner arrived from a familiar figure. Bryan Robson half-volleyed into the net after Lineker leapt to head the ball into his path from a Barnes cross. Once more captain Robson had come up trumps for England and his namesake and manager was hailing the contribution his midfield star had made.

“The skipper got things going for us, didn’t he,” said Bobby Robson. “I think he had become frustrated and, when or two players seemed to be settling for the draw, he harried and chased and got a goal good enough to win any game.” The manager’s relief was apparent as he said: “I needed the victory, the team needed it and the country needed it.”

But it seemed not everyone was pleased. Even in victory the damning headlines persisted. ‘Thank God that’s all over,’ leapt out from the back page of the Daily Express and in The Sun, Alex Montgomery – who Robson said “had been fighting my cause against all the odds” – joined many of his press box colleagues in declaring it was time for the manager to ‘GO!’.

What praise came England’s way would be gentle rather than glowing. “England’s reformation hardly amounted to a renaissance but at least they have started winning again,” wrote David Lacey in The Guardian. “If Bobby Robson really is living on borrowed time then he survived the first day of Lent without further body blows to his credibility as England manager.”

There wasn’t too much cheer in the air after this victory. But the serious business lay a month away when England were to resume their World Cup qualifying programme away to Albania. It really was must-win…

From wooden spoonists to World in Motion