In 1980 Peter Taylor wrote the book With Clough, by Taylor, as he reflected upon the wonderful partnership he had built with Brian Clough. The book has now been republished and one chapter makes for particularly interesting reading, as Taylor offers a rare insight into how things would have been if Clough had been handed the England job…

Whenever an image of Brian Clough is shared on social media, you can almost guarantee that someone will declare he should have been England manager. And that it will then be stated as fact by another poster that we would have won the World Cup with him in charge. Given the success he enjoyed with Peter Taylor at Derby County and Nottingham Forest, it’s little surprise many should think this way.

But the other comment that tends to crop up is that it wouldn’t have worked because Clough simply wouldn’t have been able to get along with the FA. The man himself would crack jokes in later years about how “they were worried I was going to take over the FA… and they would have been right”.

It will forever be a great footballing ‘what if?’ after Clough was overlooked for the England job in December 1977, as Ron Greenwood was instead handed the role. But a rare glimpse into how England would have looked with Clough at the helm is provided by his sidekick Taylor in the book With Clough, by Taylor. Written in 1980, it is now back on the shelves after being republished. Within it, Taylor discusses what changes he and Clough would have made if they had been appointed instead. Greenwood’s England was certainly not their England.

No case for the defence

Taylor was a man who took pride in his judgements on players and he didn’t hold back in assessing whether Greenwood’s men would have been part of their England set-up. “His defence would have given me nightmares – Phil Neal, Phil Thompson, Dave Watson and Mick Mills,” he wrote, noting the poor delivery from the centre-backs and voicing concern over the age of Watson and Mills. Watson, a mainstay of the defence for so long, was written off as someone “who ought to have been discarded two years ago”.

Other players who were central to the Greenwood operation also seem to have failed to impress Taylor – and therefore may have been out of the picture under him and Clough. Steve Coppell was “honest and hardworking” but “hasn’t got class”, although he was afforded a more positive judgement than his Manchester United colleague Ray Wilkins. The midfielder was dismissed as being “a negative footballer and nothing will change him”, with Taylor adding: “He plays too many square balls, lacks quickness off the mark and, although he can shoot spectacularly, doesn’t score enough goals.” Such a reputation would forever be hard for Wilkins to shake off.

It wasn’t just the old guard that Taylor was not keen on. Emerging players Peter Barnes and Kenny Sansom’s “England prospects have been over-boosted”, with Taylor’s critical comments on the latter especially surprising given the long England career the left-back would go on to enjoy. “Some people believe that Sansom can establish himself as one of England’s greatest left-backs, but I’m not convinced because I’ve seen him taken to the cleaners too often. Fast men like Trevor Francis and Martin O’Neill turn him inside out,” wrote an unimpressed Taylor. Also warranting a negative mention was “predictable player” Kevin Reeves, who was capped twice around this time.

Given the love Clough and Taylor both felt for Peter Shilton, it’s little surprise that they would have made him the outright number one goalkeeper and Taylor had little respect for Greenwood’s policy of Shilton sharing goalkeeping duties with Ray Clemence (Clough was also vocal over this arrangement). Other policies of Greenwood’s would attract criticism, including his decision to field six Liverpool players against Switzerland in 1977 and “we wouldn’t have carted around a veteran like Emlyn Hughes as a sort of non-playing captain”. Taylor also wrote of how they would have put the emphasis on younger players, rather than experience, given the need to prepare for the 1982 World Cup and the physical demands it would create.

So, if several players were being discarded, who would be given their chance? Members of the Glenn Hoddle fan club – eternally frustrated by how they believe the gifted midfielder was utilised by his country – may take comfort from what Taylor wrote about him: “I could throw him among the finest footballers on earth and be confident that he would perform at their level. The job of an England manager is to find another ten like him.” 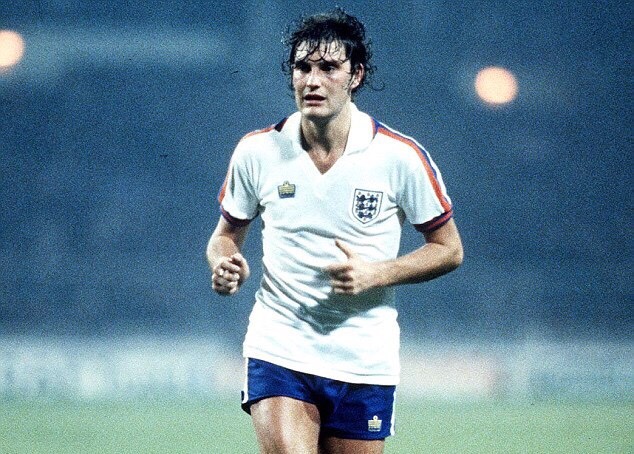 Glenn Hoddle was praised by Peter Taylor in the book.

Another man who Taylor believed deserved to feature more prominently was Ray Kennedy, who was restricted to 17 England caps. Taylor wrote: “I rate Kennedy for temperament, for his reading of the game, for his knack of getting into the thick of the action and for the way he is always infiltrating by the far post.”

Also praised was fellow midfielder Gordon Cowans, who “would have been capped early if Brian and I managed England”. Taylor added: “He is a top-class footballer who is strangely under-rated.” Up front he stated that Cyrille Regis – who was not capped until 1982 – would have been given his chance under the Clough/Taylor regime, while Peter Ward “ought to have been tried out long ago”. As it was, he made only the briefest of cameo appearances against Australia in 1980.

What is often forgotten is that Clough and Taylor did get to take charge of England at youth level on a part-time basis after Cloughie was knocked back for the senior role. It was an odd arrangement and would not last long. As Taylor would note in his book, he and Clough were far more used to dealing with senior players who they could more easily shout and bawl at; it is questionable how much some senior FA bigwigs of the time would have wanted the ever-opinionated Clough – and to a lesser extent Taylor – involved in proceedings at any level; the demands of club football meant the pair could devote little time to the roles; and, most curiously of all, the side already had a manager who they would have to work alongside in Ken Burton.

Taylor offered his own views on their appointment and possible motivations for why they were offered the roles, as he wrote: “Brian and I could hardly criticise the running of England when we ourselves were part of the operation, nor could we reject the youth job because that could make us appear disloyal and jeopardise our chances should the senior managership fall vacant again.” These would, sadly, be the most senior roles they would ever hold in the England set-up.

The arguments that Clough and Taylor would have succeeded on the field with England at senior level but would have been unable to deal with the FA hierarchy off it are given credence by what happened when dealing with the youth side. They would win a tournament in Las Palmas, but Taylor would recall a series of disagreements that occurred with officials during the trip. He wrote: “The attitude was obvious; we were interlopers and boat-rockers and they didn’t like us. I bet the offices at Lancaster Gate rang with applause when we resigned. I believe that a lot of FA councillors didn’t want Clough and Taylor at any price and that’s why we didn’t get the England managership when we were better qualified than Ron Greenwood.”

And so, as they left their roles they also effectively kissed goodbye to any lingering hope of leading the senior side. But they would have the sizeable consolation of European glory at Forest to savour, which Taylor reflected upon in this book along with their earlier joys at Derby.

The book was originally published three years before the Clough and Taylor relationship was irreparably damaged by a dispute over Taylor – now in charge of Derby after a brief ‘retirement’ – signing John Robertson from Forest. But it has been suggested Taylor’s decision to write this book marked the beginning of the end of the partnership. Even within it there were hints that the pair weren’t quite as close as the public believed, with periods noted when they hadn’t spoken for a while – when not working together – and Taylor making reference to how they didn’t socialise away from work. They would never sadly make their peace after their 1983 bust-up, much to Clough’s lasting regret after Taylor’s death in 1990.

But as Taylor’s daughter, Wendy Dickinson, writes in the new foreword to the book: “In truth, bearing in mind that they were both such strong-minded, opinionated men, I am more surprised that they managed to stay together so long.”

And when they did work together they forged a magical partnership. Alas, we will never know what would have happened if they had been given the chance to lead England. But this book offers a rare glimpse into what might have been.