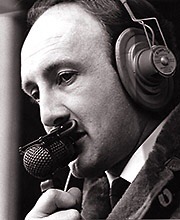 Last month we began our look back at the England commentary career of Barry Davies, covering the period up until the 1986 World Cup. Now we focus on the years after that … Continue Reading Barry Davies – the England years (part two)

Hearing the evergreen Barry Davies commentating during Wimbledon recently in his 80th year, we became nostalgic for his days covering football. In the first of a two-part look back at … Continue Reading Barry Davies – the England years (part one)

England on TV – Life Before the Red Button

In the first of a series of nostalgic recollections of the experiences of millions watching England on television, we focus on when live coverage was a luxury rather than taken … Continue Reading England on TV – Life Before the Red Button